Can a smartphone app plus radar detector protect against both threats? 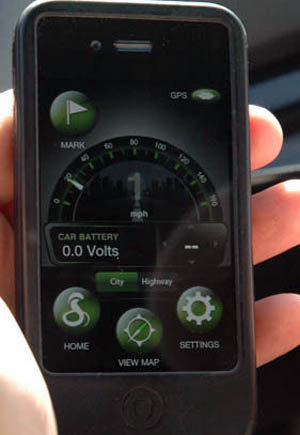 The Cobra iRAD 100 combines a windshield-mounted radar detector with Cobra iRadar, a smartphone application and the Internet. The detector is linked via Bluetooth to a compatible Apple iPhone, iPod touch or Android phone. The detector uses that device's display for warnings, status information and its GPS for location data, speed and maps. All of the detector's functions save for power and audio volume are likewise controlled remotely by the phone.

Less than a year after its arrival, a competing system, Escort Live, was introduced and handily outpaced the Cobra iRadar in our first test of the two.

According to Cobra, the iRAD 100 "combines industry-leading radar, laser and speed & red light camera detection technology with the power of the iPhone." That's a lofty claim, particularly in light of the iRAD 100's attractively low $129.95 pricetag, so we bought an iRAD 100 and began logging miles with it along with an iPhone 4S.

Using a smartphone as a radar detector and red light camera-avoidance system might seem appealing, but sometimes a concept is better than its execution. We'll get back to that issue in a moment, but first a brief look at the Cobra iRAD 100's features and functions.

The detector is a simple box, with no display and no controls save for an on/off/audio volume thumbwheel switch, a mute button and a red, power-on LED. It can be used as a stand-alone radar detector but without an iPhone, it's nearly helpless. It will continue to deliver audible alerts, but there's no way to change operating modes or gain access to its user preferences. (When the app crashed, my iRadar 100 was locked into city mode for the weeks-long duration of the software snafu, for instance.) And without a smartphone's GPS, the Cobra iRAD 100, like the competing Escort systems, can't convey location-based alerts such as red light camera locations.

Downloading the iRadar app was a simple task and pairing with the iPhone was quickly accomplished. we found that phone calls could easily be made or received and it was possible to navigate to other apps and then return to iRadar. But this didn't always occur without losing Bluetooth pairing, necessitating the execution of another setup routine before using the app.

Most of the iRadar 100's other functions were discovered solely through experimentation; the wispy sheet of instructions accompanying the unit mentions little more than installation and basic operation; descriptions of most other functions remain MIA. Unfortunately, the Cobra iRadar Web site is scarcely more informative.

The Dashboard screen displays a digital speedometer, compass and the vehicle's electrical system voltage. The Map screen must be used to display GPS location-based alerts. This reliance on the iPhone's screen means the phone must be mounted close to the driver, where it can easily be seen and operated. No bracket is supplied for this purpose; you'll need to consult with aftermarket suppliers to find a method of mounting the phone.

The iRAD 100 uses Cobra's Aura location database to warn of red light and speed cameras. we found its alerts to be reasonably accurate but noted lapses when it alerted to a camera only after we'd already passed it. On other occasions it warned of cameras that had been removed years previously. And it alerts much too far in advance at slower speeds—up to 2,900 feet on many occasions when, for instance, the rival Beltronics (BEL) Pro 500, a cloned Escort Passport 9500ix GPS-enabled model, starts alerting at 400 feet. Being bombarded with audible/visual alerts for that extra 2,500 feet is an unnecessary nuisance.

As with other Cobra GPS-enabled radar detectors, we also found that when cruising on urban freeways it's prone to squawking warnings of distant cameras on surface streets that pose no threat. we also noted frequent false alarms, mainly caused by radar-controlled automatic door openers and other radar detectors. Escort controls the patents to nearly all of the critical technology to eliminate these false alarms and the iRAD 100—as well as all other Cobra GPS-enabled radar detectors—clearly pays a price for its absence.

Drivers not threatened by automated enforcement won't benefit from the significant reduction in false alarms afforded by BEL and Escort GPS-enabled radar detectors or Escort Live-equipped non-GPS detectors, the biggest single advantage of GPS in a radar detector.

The Speed-Variable Sensitivity, employed in Escort/BEL GPS-enabled radar detectors for example, automatically adjusts sensitivity based on road speed, sharply limiting false alarms when you're moving slowly, one of several features missing on non-BEL or Escort models. 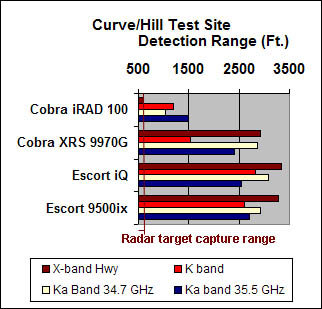 Experience has shown that an information-delivery system dependent upon GPS coordinates is only as accurate as the data entered into the database. And after an extensive test of this and competing location databases we found that the Cobra Aura database is significantly less accurate than the top-ranked Escort Defender database [shared with BEL (Beltronics) GPS-enabled models] and the Trinity database from Cheetah. On the road, this meant the iRAD 100 failed to warn of one camera in every three, somewhat less accuracy than Cobra claims and less than we'd prefer.

The iRAD 100 has the same drawbacks we noted in the Cobra XRS 9960G, XRS 9970G and XRS R10G in a shootout of GPS-enabled radar detectors. These include the propensity for urban false alarms and rather frequent alerts to alleged enforcement hotspots, the latter dutifully reported by well-intentioned but misinformed users. Few civilians can tell the difference between a police patrol unit and a traffic enforcement unit and the former is rarely a threat since most aren't packing radar or laser, nor are they focused on traffic infractions.

The same goes for the average Joe's ability to recognize a red light camera. wen that same database test, Photoenforced.com, Trapster and similar services constantly bleated warnings of red light cameras at intersections that sported only inoffensive traffic surveillance cameras. You want information for nothing? This is the downside.

Of more importance, we were unimpressed by the iRAD 100's primary function: its ability to detect police radar guns. It's nearly blind to X-band radar; even in unfiltered highway mode, at the detector-friendly Straightaway Test site it belatedly caught sight of the radar at 734 feet, some 5.4 miles after its competitors alerted and a quarter-mile after the radar had already locked-in our speed. It fared even worse at the much more difficult Curve/Hill Test Site. That was in maximum-sensitivity highway mode; in filtered city mode, X-band radar detection is little more than a vague promise.

To be fair, only one highway patrol continues to use X band radar extensively, but enough remain in service, particularly in cash-poor backwoods hamlets, that we'd advise shoppers to consider this nearsighted behavior before whipping out a credit card. The iRAD 100 fared somewhat better against K- and Ka-band radar but it still struggled to deliver adequate advance warning except under ideal conditions. Keep in mind that we're talking about a $100 radar detector here; there's no way it'll compete with high-end models in performance, including those from Cobra.

That lackluster radar-detection capability, its GPS database deficiencies and a complete dependence on the iPhone for visual alerts and to control key functions all exact some major compromises. So while we'd say the Cobra iRAD 100 is a clever concept, in execution it's far short of perfection. Consider it best suited to slow-moving nerds more focused on playing with their smartphones than on the task of driving.