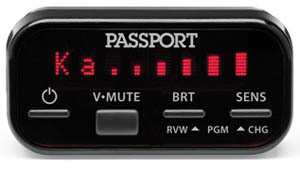 Others, like Jaguar, Range Rover and Land Rover, for instance, offer heated windshields with a fine wire mesh laminated into the glass. In a recent test we made the mistake of using a Jaguar XJ Supercharged for the target car and were baffled when none of the 11 models could detect most of our radars from more than a few hundred feet away, rather less than the six miles of range they'd demonstrated in a previous test. Only when we closely scrutinized the windshield did we note the nearly invisible heating element wire mesh. But it's a safe bet that an XJ driver could've driven a lifetime without noting the detector's supernaturally quiet operation.

The traditional solution has been the custom-installed remote radar detector whose components are built-in to the vehicle and not behind the windshield. Trouble is, these remotes are pricey. (The Escort Passport 9500ci, in our opinion the best remote model, costs $1,999.

But the base version of the 8500Ci is $549.95. It lacks GPS and can't offer the huge benefits afforded by that technology—protection from red light and speed cameras plus freedom from annoying false alarms. But the Escort 8500Ci Plus does have GPS and delivers much of the goodness of the pricier BEL STiR Plus or its twin, the Escort Passport 9500Ci.

Meter options include Bar Graph (these increase progressively to depict signal strength); Spec Mode or Expert Meter. The latter will track up to nine simultaneous radar sources, displaying the band ID and relative signal strength for each. For the knowledgeable, Spec Mode is invaluable, allowing non-police radar signals to be identified and dismissed at a glance.

The display offers a choice of pilot displays including full-word (Highway), single-letter (e.g., H for highway); a single letter with a left-to-right red scanning dot, or a digital readout of vehicle voltage. The last option gives a real-time view of the electrical system voltage, a useful tool in spotting impending alternator or battery failure.

The 8500Ci is available with a special version of the Escort ZR4 laser-jamming system whose jammer modules are linked to the grille-mounted radar antenna. Other systems, including those from Escort and BEL, route these wires through the firewall instead. Keeping the connections on the forward side of the firewall means not having to drill additional holes and snake the wires through the maze of underdash wiring, a major time-saving feature.

An equally vital benefit is a near-total freedom from false alarms. Unlike a conventional radar detector that will dutifully alert to any stationary source of false alarms every time you drive past it, the Escort Passport 8500Ci, like other GPS-enabled BEL and Escort detectors, identifies and progressively locks-out these signals. After it learns your driving environment, the detector refuses to alert to any fixed, non-police radar signal, making it almost supernaturally quiet. We've extensively tested this attribute and found it to be every bit as effective as promised.

The Escort 8500Ci's performance mirrors that of the BEL Pro 500, a dash-mount model that perennially ranks high in our field tests. That's hardly a surprise as they share a platform and perform similarly.

In a recent comparison test of the Escort Passport 8500Ci and the K40 Calibre, the Escort showed a convincing superiority over the pricier K40. With its comparatively modest price, stellar performance and stealthy, built-in design, the Escort 8500Ci earns a best-buy recommendation.