Note: The Escort Max and Max 2 have been replaced by the Escort Max 360c and Escort iX
Escort Passport Max 2 defends against radar, lasers and red light cameras.

Many have sought a radar detector that combines the GPS of the Escort Passport 9500ix with the long range of the Escort Redline. GPS would chop false alarms and protect against red light cameras. Longer range would sniff out distant radar traps other detectors might miss.

The Escort Passport Max/Max 2 family of detectors aims to appeal to both camps with a combination of GPS and high performance. (The Max was discontinued, its place taken by the Max 2. The two are identical save for the Max 2's Bluetooth.)

The Escort Passport Max 2 comes with a GPS-style StickyCup mount that clings tenaciously to the windshield. A thumbwheel friction lock allows angle adjustment, and the arm holding the detector is short to minimize shake.

The Escort Passport Max 2 is controlled by six top-mounted buttons. These are recessed, rather than raised like on the Escort Passport 9500ix and Escort Redline, making them tougher to locate and operate by touch alone. Missing is the GPS on/off button of the Passport 9500ix, eliminating the possibility of accidentally disabling the function.

Control butttons are backlit, easing the task of operating them at night. During alerts their backlighting flashes.

The OLED display’s font for operating mode—Auto, Auto NoX or Highway—is factory-set to blue, with a matching backlighting color for the control buttons. Displayed above the operating mode is a series of seven horizontal LEDs that illuminate progressively from the center outward, 40 times per minute.

At the display’s far left is vehicle speed, to its right is system voltage. When linked to the Escort Live system and either an iPhone or Android smartphone, the posted speed limit also appears. 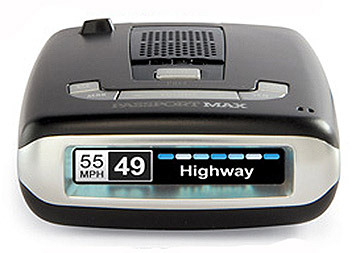 Other choices of display colors: green, red or amber. Regardless of the choice, font color for speed and vehicle voltage remains white. This is the first use of an OLED display by Escort. It’s colorful but low-contrast, making it difficult to read if the sun is out, forcing reliance on the audible alerts.

Users who prefer plug-and-play operation will opt for the factory-default Novice mode. This permits a choice of display colors; all other user preferences remain off-limits.

Engaging Advanced mode allows access to the user settings. Meter mode offers the same three options as the Escort Passport 9500ix and Escort Redline—bar graph, Spec and Expert—plus Simple mode. During alerts this displays a generic "Caution" at speeds below 20 mph or "Slow Down" at any speed below the user-selected Overspeed threshold.

Like its two siblings, the Escort Passport Max 2 has a good audible information-delivery system with a choice of voice alerts or two different sets of tones. The latter includes the standard Escort tones or doorbell-like chimes.

A 3.5mm audio jack is provided for headphones, an external speaker or helmet headset. It’s stereo, unlike the mono output of previous Escort models, and thoughtfully protected by a rubber plug when not in use. Adjacent to this is a mini-USB jack for updates of the Defender camera database or detector firmware revisions. This camera database proved best-in-class in an extensive test.

Standard features include AutoLearn, AlertLock and Speed Alert, same as the Escort Passport 9500ix. One unique feature is AutoPower that turns it off after a period of inactivity. The delay can be set at 1, 2, 4 or 8 hours, with a factory default of four hours.

On the road, we found the Escort Passport Max 2 to behave very similarly to the Escort Passport 9500ix. Over time it progressively locked out errant signals causing false alarms. Then it usually stayed quiet unless it was warning of police radar or red light cameras.

Part of this behavior can be credited to speed-variable sensitivity where the microprocessor reduces sensitivity at low speed, limiting false alarms in town. As speed increases, sensitivity rises proportionally, for maximum protection.

We found the Escort Passport Max 2 to be a stylish, well-mannered radar detector. On the downside, its dim display tempered our enthusiasm a bit.