The detectors tested have been discontinued. See the latest models.

Scottsdale, Arizona was an early convert to photo enforcement and remains a major tub-thumper for automated ticketing. Perhaps coincidentally, both of the firms dominating the U.S. photo enforcement market, Redflex and American Traffic Solutions (ATS) are headquarted here. 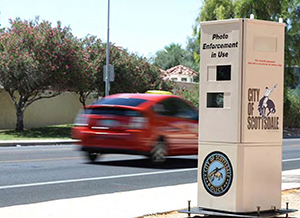 This makes the city Ground Zero for new photo-enforcement technology. Long before it appears elsewhere this equipment is field-tested in Scottsdale.

ATS is the current contractor for the city's camera program, consisting of 18 red light and speed cameras that saturate the small community. Two photo radar vans are also in service. But the vans proved too big to fit conveniently in some school zones. As a solution ATS rolled out the new Portable School Tower, a mini-photo-radar unit.

The innocuous box contains K-band radar, a microprocessor and a strobe flash; it's light enough for crews to rotate it among the streets bordering area schools.

Fortunately, this is the same radar used in ATS photo radar vans, which can be detected. That's the good news. The bad news is that this low-powered radar is extremely tough to spot, its narrow beam aimed at a shallow angle across the road. From experience we knew that only a hypersensitive radar detector would spot it in time. 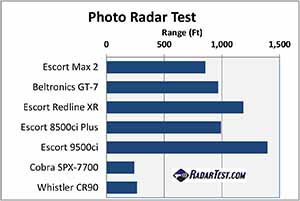 To find the best radar detector to meet this new threat, we squared off against an ATS Portable Tower with detectors from Beltronics, Cobra, Escort and Whistler. Street-priced from $149 (Cobra) to $1,999 (Escort Passport 9500ci), as expected, the pricier models performed the best.

The Cobra SPX-7700, for example, spotted the radar at 240 feet, theoretically far enough away for an alert driver to react. But we tested on a nearly deserted road and our past tests show that with traffic present, detection range shrinks dramatically. Other vehicles block or deflect the feeble radar beam, chopping range by up to 90 percent.