The LED vs. OLED Controversy in Radar Detectors

Why you're having trouble seeing what your detector is telling you 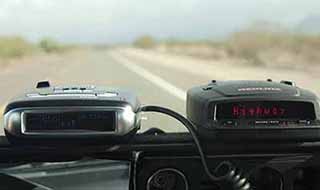 Passport Max 2 (left) with its OLED display at maximum brightness. Even at 75% intensity, LED display of the Escort Redline stays readable in sunlight.

If the display on some radar detectors looks different, it's because you're looking at OLEDs (Organic Light Emitting Diodes) instead of LEDs. OLED technology uses an organic layer to create a digital display, much like a miniature flat-screen monitor. Onto this can be displayed alphanumeric characters, images or both.

An LED (Light Emitting Diode) works like a light bulb: apply electrical current and it glows. Rows containing hundreds of LEDs are used to create alphanumeric characters—Ka Band or 9, for example.

The LED is cheap and reliable, but it lacks the versatility of an OLED. The latter is more expensive, which is why manufacturers tend to use it on higher-end models. Regardless, an OLED display does have two marketing advantages over its elder LED brother—it looks sexier and it can display images.

Cobra Electronics was the first to recognize that an OLED display can make a detector stand out from the pack. When I tested the XRS-9970G a few years ago I charitably observed that the display was gorgeous. At 1.5 inches square, it was also huge. Appearance aside, driving with the Cobra was a chore. Staring at this miniature TV dead-center on the windshield was an enormous distraction. It was worse at night. 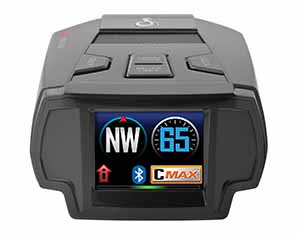 To the human eye, these two technologies behave differently. When an LED lights up, it's easy to spot, even with peripheral vision. An OLED doesn't have the same punch: it's not nearly as bright and it merely overlays a foreground color over a background. Even a white font over a black background appears relatively muted.

The OLED's lower contrast is most noticeable under tough daytime lighting conditions. Here in the desert southwest, a detector hanging from the windshield is usually backlit by intense sunlight.

The OLED doesn't fare well in these conditions. When testing some detectors with OLED displays, I find it necessary to remove my sunglasses, pull the detector from the windshield and hold it up to my eye to read it.

Cobra compensates for an OLED's lower contrast by using super-sized fonts and images to increase readability. Cobra's alphanumeric characters are over twice the size of Escort's and there's significantly more space (kerning) between them.

Escort and Beltronics (same company) took a different approach by making its OLED and LED displays similar in size, allowing either to be used in the same model. The flexibility may be cost-effective, but shoehorning more data into less space exacts a toll on legibility.

For example, in some display modes Escort's fonts become even smaller. The Passport Max 360, for instance, in Spec mode can show the numeric frequency of two radar guns simultaneously, one front, one rear. To display the extra data font size shrinks a further 30 percent, making its display even tougher to read.

If you can read a newspaper from across the room, none of this matters. For everyone else, the LED vs. OLED issue has significance because a radar detector is an information-delivery device. One that's better able to convey that information can help the driver dodge a speeding ticket.