Can GPS Really Make a Radar Detector Be Quiet? 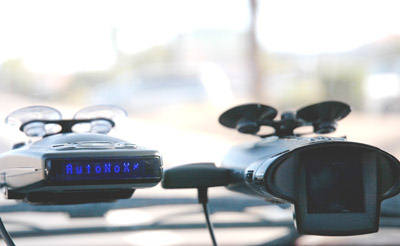 To measure their resistance to common sources of false alarms, we drove with a Cobra XRS 9960G and Escort Passport 9500ix over our 87.4-mile-long test route in metro Phoenix. It includes 35.1 miles of 6-lane urban freeway into and out of the city core, zoned at 55 mph or 65 mph depending upon the location. Two more segments totaling 52.3 miles are comprised of city streets in Phoenix, Scottsdale, Tempe and Mesa, Arizona, zoned variously from 30 mph to 45 mph. The latter portion meandered through mixed-use neighborhoods dotted with strip malls and convenience stores.

Before departing, we entered the Cobra XRS 9960G's user-selectable menu, tailoring it for the quietest possible city behavior. This included disabling X band and placing it in City X+K mode. We could have similarly disabled X band in the 9500ix but instead of scrolling through its menu options, a faster alternative was to hit the sensitivity switch a couple of times to select City NoX, a shortcut that accomplishes the same task.

Two laps were made with the Escort. On the first one we noted the details of each false alarm. Here the Passport 9500ix's Spec Display feature was invaluable in identifying the precise frequency of each alert. Then we stored the location with a brief, three-tap sequence on the SmartCord plug's remote mute button. (Standard on high-end Escort and BEL models, this oversized power plug has a power-on LED, an alert light and a mute button, saving a long reach to the detector.)

We counted 42 microwave signals: 24 X-band and 18 K-band. Every X-band and all but two of the K-band signals were from automatic door openers. The others were radar message trailers near Sky Harbor Airport. We also got one red light camera alert. The camera had been removed but so recently that signs announcing its presence were still up. We deleted this marked location from the Escort's database.

Next we made a third circuit, this one with the Cobra XRS 9960G. When it alerted, we cross-referenced the signal to our known emitters and noted any new ones. Route complete, we tallied the scores. It was Cobra: 19, Escort: 0 false alarms. Analyzing the data, we found that the Cobra XRS 9960G alerted to all 16 K-band door openers stationed along the route, plus three Ka-band signals, most likely other radar detectors in passing cars. One red light camera alert occurred on the freeway, triggered by a camera half a mile north of us on a surface street.