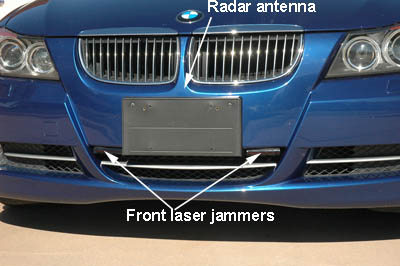 If you're looking for a custom-installed remote radar detector system—complete with laser jammers—the number of contenders is pretty small: four. That's the same number available at the time of my 2005 remote-model test and hardly an overabundance.

K40 had this rarefied segment to itself until Escort joined the fray. Its current line-topping custom-installed remote is the Escort Passport 9500ci. The 9500 ci comes with the test-winning Escort Laser ShifterPro laser-jamming system. K40 offers the Calibre model with Defuser EX laser jammers that can also be linked to other K40 remote models.

The arrival of the Escort Passport 9500ci allowed an opportunity to see if K40's bold claims for the K40 Calibre and the K40 Defuser EX would hold water. Over a month-long period I field-tested both for performance and also logged 2,000 miles with each in a combination of city and highway driving. Here's what I found.

The Escort Passport 9500ci is a departure from previous Escort remote systems since it uses GPS technology to limit false alarms.

All operations are handled by a thumb-sized surface-mounted control unit. It's backlit, making the important buttons easy to find and use at night. The power switch is tough to find and tougher to operate. Fortunately, the system powers-up when the car is started and shuts off automatically as well.

A small LED display shows operating mode and other vital information. For a low-profile installation a bi-color LED can be mounted in the instrument cluster, replacing the display. The K40 Caliber offers the same option although its LED is a single color.

Installing the Escort Passport 9500ci took eight hours. That included time spent fabricating and painting two mounting brackets for the front jammers, as the factory jobs were less than ideal for the miniscule mounting area offered by our mail box-sized Honda.

In contrast, it took 6.5 hours to install the K40 Calibre and its single front laser jammer, 45 minutes of that time spent diagnosing a bad connection. With no rear jammer and only one in front, fewer man-hours of labor were needed.

The Escort Passport 9500ci's quicker installation was partly due to its idiot-proof interface box adorned with labels such as "Rear Laser" and "Display." Another time-saver is Escort's use of modular connections, same as a landline telephone handset's. I've never seen one come loose or fail. Their unit also uses color-coded wires for all components.

The Escort Passport 9500ci also has self-diagnostic capability. Its text display shows error messages like "No rear shifter" or "Check receiver wiring" to pinpoint the problem. In contrast, isolating an installation issue in the Calibre meant laboriously checking each circuit with a multimeter before finally spotting a poorly-crimped connector.

Performance was easy to quantify. At both test locations it hammered the K40, making it the best-performing remote-model detector I've tested.

K40 trades heavily on the notion that a rear antenna is necessary to spot radar coming from behind. Yet the Escort Passport 9500ci outperformed it at both test sites using its forward-facing antenna—while driving away from the radar guns.

The Escort laser jammer system worked equally well, jamming some of the guns down to point-blank range and doing almost as well against the rest.

On the road, it stays reasonably quiet. On daily commutes it rarely goes off and is nearly as quiet on highway trips. In all, a remarkable performance from what may be the best custom-installed radar detector.

K40 calls the Calibre an "undetectable" radar detector. The words "stealthy" and "stealth" also appear prominently in promotional material and on the company website. True, it's immune to the 1990-vintage Technisonics Interceptor VG-2. But that was obsolete by the mid-nineties and it has rapidly been supplanted by the vastly superior Spectre (aka Stalcar) RDD detector detector. The Spectre RDD can sniff out the K40 Calibre at a considerable distance. But no matter, forget about advertising hyperbole and let's look at the product.

The K40 Calibre's major components look pretty much like those of the K40 2000P model. The radar antenna looks the same, but now has an extra module on one end to accommodate its Bluetooth gadgetry. There's no control/display unit (one's available as a no-cost option). Power, manual mute, audio volume and three operating modes, city, highway and mute, are controlled by a small wireless transmitter that measures about one-inch-square.

According to the installation instructions, the remote can be mounted using the supplied double-sided tape or left loose. I couldn't find a suitable, perfectly-flat mounting spot and left it in a cubby hole at the top of the center stack. The first time I went to change the audio volume, it had already disappeared. I later found it under the passenger seat.

Unlike most consumer electronics with remote controls, televisions for example, there are no backup controls. Without its remote the K40 Calibre is helpless. But permanently mounting it in an easily-reached spot can also make it visible to curious eyes.

Mode changes take awhile, averaging four seconds. Then it issues a voice or tone confirmation. Get it wrong and there will be another long pause to see if you've pressed the correct button. In comparison, I timed the mode changes in the Escort Passport 9500ci at 0.24 second.

I can live with the slow response. But not with the auto-mute strategy. The typical delay before most radar detectors automatically chop full-volume audible alerts is around five seconds. On the K40 Calibre it's 60 seconds.

That's a long time to be blasted by either an alert. And I heard this alert often when driving in highway mode, as the K40 Calibre routinely issues Ka-band false alarms of phantom radar attacks coming from behind.

The alternatives are to hit the mute button on the remote or to place the unit in full-time mute mode. In this mode there are no audible alerts, only a flashing blue LED. On dual-antenna systems like my test unit, a second LED is furnished. With the K40 Defuser EX2 added to the system, the front and rear laser jammers also report via these LEDs.

There's no visual indication of the K40 Calibre's operating mode or volume level or whether it's set to voice or tone alerts. To gain that information you'll need to press a button on the remote to see which LED lights momentarily, then press the button again to change the setting. If it's in mute mode, only the LED will confirm a selection. This process can take up to 20 seconds.

On the street I found the K40 Calibre to be a model of civilized behavior. In two days of driving about town it never issued a single false alarm. That made me curious. Any radar detector that's claimed to have high performance inevitably false-alarms. This one didn't.

En route to field-test the units I got one clue to what might be behind this unusual - if exemplary - behavior. When I switched to highway mode, the false alarms started, many of them caused by other radar detectors. As we began testing we found one reason for the lack of falses in town: The Calibre doesn't detect X-band radar in city mode, even from four feet away.

At the difficult Hill/Curve test site, this time in X-band highway mode it did somewhat better, scoring about half of the rival Escort Passport 9500ci's range. It scored reasonably well on K band and on 34.7 GHz Ka-band, delivering about 70 percent as much range as the Escort Passport 9500ci. But at this location it belatedly alerted to the most commonly used Ka-band radar frequency, 35.5 GHz, only after the radar had already locked-in a speed. 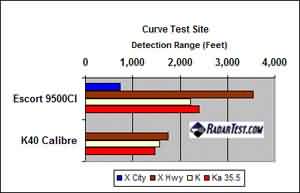 At the no-brainer Straightaway Test Site it again remained mute on X band city. In X band highway it eked out 2,619 feet of range, compared to the Escort Passport 9500ci's 28,204 feet. In contrast its K-band and 34.7 GHz Ka-band scores were excellent. However, it again wasn't enthusiastic about listening for 35.5 GHz radar, finally alerting when we'd closed to 3,965 feet, a few hundred feet before the radar spotted us and 4.6 miles after the Escort Passport 9500ci had sounded a warning. 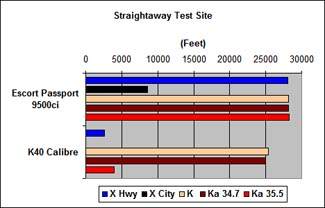 K40 product literature says a single Defuser EX is adequate to protect an average-sized passenger car. Larger vehicles, with their greater mass, are better targets for lasers. For those K40 suggests adding a second K40 Defuser EX. Up to two jammers can be used for the rear of the car. Had I used two front and one rear K40 Defuser EX, emulating the standard Passport 9500ci configuration, it would have pushed up the K40 Calibre's price to a lofty $2,652.

Jammers installed on test vehicle during a recent test.

We found that for the K40 Defuser EX to have an effect on lasers they must be aimed at the jammer itself. If the point of aim was a headlight, all but one of our five laser guns could get a speed almost instantly. The Laser Atlanta Speed Laser in Stealth Mode could nail the K40-equipped car almost from the moment it began rolling.

The only laser gun against which the K40 Defuser EX had a measurable effect was the first-generation Stalker, jamming it to an average of 422 feet.

In any event, the K40 laser jammers were incapable of protecting against modern laser guns.

I was hoping to like the K40 Calibre and was intrigued by the promise of wireless operation. It was disappointing to find large gaps in its performance envelope—ineffective laser jammers, for instance. This, plus a litany of ergonomic miscues and missing features, dampened my enthusiasm for this hyper-expensive remote system.