Low-cost protection from radar and lasers 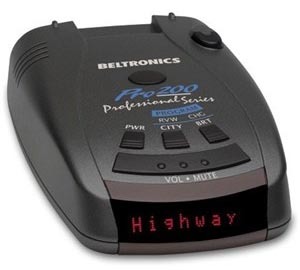 The Beltronics Pro 200 occupies the middle ground between the BEL Pro 300 and the entry-level Pro-Series offering, the BEL Pro 100.

The BEL Pro 200 shares a case with its stylish upscale siblings, its housing made of a unique matte-black, soft-touch material. This rubber-like finish not only makes the BEL Pro 200 feel like upscale hardware but also makes it very resistant to generating windshield reflections.

The BEL Pro 200's high-visibility red LED display is the same quality piece found on BEL's high-end models and we found it much more readable in difficult lighting conditions than the competitions' LCD or OLED displays.

A 3.5 mm audio jack on the BEL Pro 200 allows it to be linked to an external speaker, earphone or helmet headset. Motorcycle riders on a budget now have another radar detector for their consideration.

Upgrade to the BEL Pro 300 model and there's a better way to limit false alarms. The BEL Pro 300 is compatible with Escort Live, which uses Bluetooth to link to an iPhone 5 or Android smartphone. Using GPS, the BEL Pro 300 lets the user lock out static sources of false alarms, keeping it extra-quiet in town.

Although equally effective, this combination isn't quite as sophisticated as that of the Escort Passport Max 360 or the Escort iX, both of which have integral GPS. But Escort Live is a substantially less expensive alternative.

It works, too. We tested the world's long-range champ, the non-GPS Escort RedlineXR, in combination with Escort Live and saw a huge spike in its overall protection level. Learn more...

The BEL Pro 200's radar range was beyond our expectation. On X band it scored within 10 percent of the BEL Pro 500 and was within a few feet of it on K band as well. Given the Pro 500's $399 retail price, the scores of its little brother were doubly impressive.

The performance gap widened when facing Ka-band 34.7 GHz radar where it delivered about half the range of those high-end models. That gap increased another five percent when it squared off against the other dominant Ka-band frequency, 35.5 GHz, used by over 90 percent of the remaining Ka-band radar guns deployed nationwide.

We're impressed by the BEL Pro 200's high performance, comprehensive features and user-friendly operation. It reigns supreme in the under-$230 price class.