Note: Discontinued. See the reviews of the latest models. 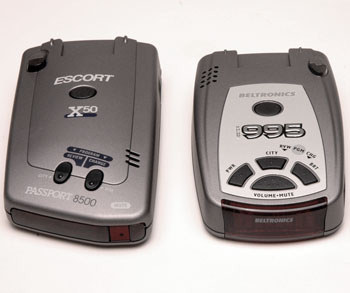 The Beltronics Vector 995 was the Rodney Dangerfield of radar detectors. Although one of the perennial top-rated detectors in our tests, it languished in the shadow of its corporate sibling, the Escort Passport 8500 X50 (also discontinued).

A pity that the BEL got no respect: what many didn't realize is that both used the same Escort platform and under the skin, the two were identical.

The two models differ slightly in size: the BEL is 0.125 inch wider but 0.625 inch shorter than the Escort. Motorcyclists will like this smaller footprint as it makes the BEL an easier fit for cramped sportbikes.

Unlike the Escort 8500 X50, the Vector 995 offers voice alerts. This frees the driver from having to study the display for information.

The brightness of the high-visibility red LED display is four-step adjustable and offers a dark mode for discreet nighttime running. In this mode only a dim icon remains lit, denoting the operating mode. The display remains dark, including during alerts. Instead, the Smart Cord—a power plug with integral status and alert lights plus a push-button mute switch—conveys visual alerts.

The Vector 995 offers Ku band detection, making it suitable for international travel. The unit ships with this band deactivated, prudent since no Ku-band radar exists in this country, despite some misleading claims to the contrary.

Like the Escort 8500 X50, the BEL has a menu of user preferences. These tailor the detector to suit the driver's taste. For instance, there are two meter (display) options, which is how the detector visually conveys information. Standard provides band ID, e.g., K for K-band radar, plus a bar graph to denote signal strength (the radar's proximity).

Selectable band defeat allows the disabling of any frequency not used in a particular state or country, X band for instance, to limit false alarms in the 49 states whose highway patrols don't use that ancient frequency. And there's a soft carrying case included for travel duty. 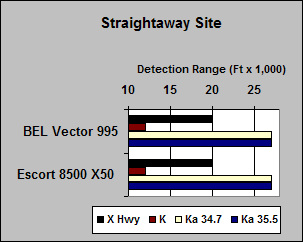 The Vector 995 detects POP mode radar, although it ships with POP Mode turned off. There's a reason for this: with POP on, signal-processing time is dramatically shortened, leading to frequent false alarms. Even if you live where POP-mode radar is common, you'll probably want to leave the feature deactivated.

The BEL Vector 995 proved to be very quiet in town, particularly when set to City NoX, which shuts off X band and eliminates false alarms generated by the ubiquitous automatic door openers.

If there was ever a question that the BEL Vector 995 is an Escort 8500 X50 in drag, our field test removed any doubts. The trio first squared off at our 8-mile-long desert Straightaway Site and turned in identical scores. In two more tests, one at our 5.4-mile-long site, the other at our short-range Hill/Curve site, they delivered similar results

This news isn't likely to spark a wholesale shift in consumer demand. Escort lavishes much of its advertising budget on the Escort brand, probably relegating BEL models like this to second-banana status.