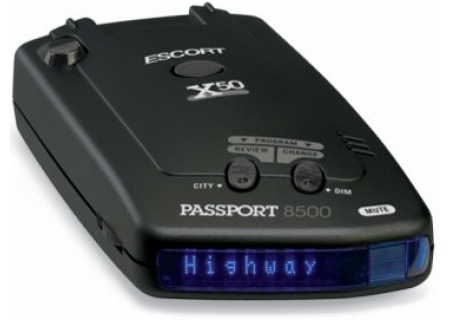 The two are similar under the skin—both use the Escort M4 platform—and they have similar performance. But the X80 has upscale features missing from the 2002-vintage 8500 X50—Bluetooth, for example.

This wireless technology isn't a big deal for some, but it is for those planning to use the Escort Live app. Aside from early warnings of nearby speedtraps, the system can also be used to lock out nuisance signals causing false alarms.

Also missing is the X80's USB port. No USB means no firmware updates, making the 8500 X50 susceptible to obsolesence.

Once the range-topping Escort, the Passport 8500 X50 slotted into the midrange of the lineup. The lower price meant fewer features. For example, it lacked the GPS technology of its upmarket siblings, the Escort iX and Escort Max 360.

Without GPS the 8500 X50 behaved like others lacking this technology, X80 included—it false-alarmed constantly in reaction to door-opener radar and Blind Spot Monitoring (BSM) systems. These operate on the same K-band frequency as police radar and have become a huge headache for detectors.

The Escort Passport 8500 X50 was plug 'n play, but it had user-selectable menu options that allowed it to be fine-tuned to the driver's taste.

Among the more useful menu items was a trio of city modes. City reduced sensitivity to combat urban false alarms.