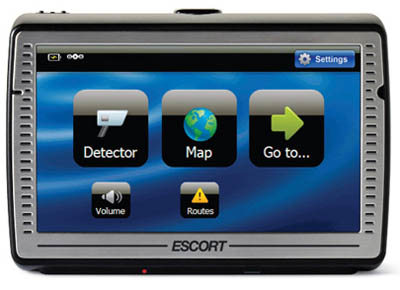 There's no denying the attraction of a gadget that offers satellite navigation plus protection from radar, lasers and red light cameras. Better still if it protects against radar and other threats.

This will be particularly attractive to those who drive in no-detector areas and prefer not to advertise that they're packing an illicit device.

An internal rechargeable lithium-ion battery powers the nav system functions for a limited time in the absence of vehicle power. When running on its battery the iQ does not provide radar/laser detection; only the nav system operates. A bicolor battery charge LED glows green when fully charged, red when completely discharged; it flashes alternately red/green when nearing fully-charged status.

When linked to the switched power source commonly found in most imported vehicles, turning off the ignition puts the iQ into Suspend Mode for two hours, after which it automatically shuts off to prevent vehicle battery rundown. A third switch position locks down the system.

The iQ comes with a SmartCord whose integral mute button silences the audio; it can also operate the Mark Location function. 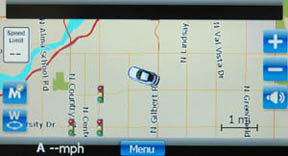 Escort Passport iQ nav screen shows the locations of red light and speed cameras with a different icon for each type.

Expert Mode shows multiple radar signals with the band, frequency and relative signal strength of each.

Escort Passport iQ nav screen shows the locations of red light and speed cameras with a different icon for each type.

The iQ's radar detector feature set is very similar to that of the Escort Passport Max, another model with GPS.

A user can add locations to the database by pressing a screen icon. Database updates are downloaded via USB port, a quick process once the Escort Detector Tools application has been downloaded and installed on a PC.

Installing an Escort Passport iQ isn't unduly difficult but it must be sufficiently high to keep the radar antenna in its lower housing clear of obstructions. We tested the iQ in a variety of new vehicles and found that smaller cars with their more limited windshield real estate exact some compromises in mounting locations.

Upon vehicle start the iQ's startup screen offers three function options: Detector, Map or Go To. The last option leads to a six-item menu of standard nav system search options, e.g., favorites, address, recent or browse. The other options are self-explanatory: Map mode allocates most of the screen to navigation tasks while Detector mode uses it for the bespoke function, along with essential route guidance information.

We found the Escort iQ to be an accurate, user-friendly nav system. In navigation mode, radar alerts are displayed in the lower-left corner as X, K or Ka.

Escort Passport iQ performance was comparable to its 9500ix sibling.

The iQ displays up to four simultaneous radar signals, showing the relative signal strength of each. Compared to a radar detector, the iQ's larger screen allows it to display this information more comprehensively.

The LCD display offers generally good readibility but suffers from the same limitations as the LCD screens on other mobile electronics: it's difficult to read with polarized sunglasses and it can wash out in sunlight. At night it directs a significant amount of light in the driver's direction and while the intensity is 10-step adjustable, even the dimmest setting can be annoying on long trips.

In our field tests the Escort iQ's radar-detection performance proved to be excellent, a legacy of its M4-platform heritage. At our Hill/Curve test site it spotted every radar from over 2,500 feet away, a showing nearly identical to that of the Escort Passport 9500ix. In town, the Escort iQ exhibited the same alacrity as the Escort 9500ix in eliminating false alarms, quickly identifying and locking-out non-police radar signals.

During our eight-month-long evaluation there was much head-scratching over how best to characterize the Escort iQ's personality. The consensus: it's a good nav system for shoppers who also want radar detection.