Pros and cons of the different types

As the name suggests, a windshield-mounted radar detector clings to the windshield with suction cups. Its chief advantage is versatility. It can be easily moved among vehicles and powered by a cigarette lighter or power outlet. Not surprisingly, most detectors sold are windshield-mounts. 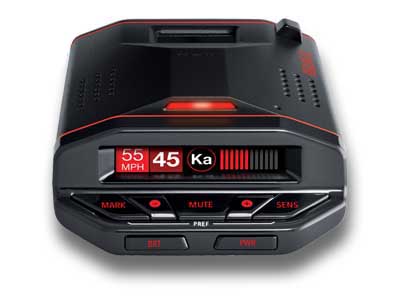 On open roads, long range is crucial. It can make the difference between getting nailed and driving ticket-free. But only a few radar detectors deliver the range to spot police radar soon enough.

High performance doesn't come cheap either. The most desirable models all cost over four C-notes. Among windshield-mounts, higher-performing models include the Escort Redline EX and a couple of models from Radenso and Uniden (mentioned below). For Escort fans the Passport X80 is an alternative due to its substantially lower price.

Long range usually means more false alarms in town, many of them caused by radar-controlled door openers at stores. Models with GPS can lock out these signals and stay quiet. They also store camera locations in a database and warn when red light and speed cameras are near.

Red light camera protection isn't a big deal unless you drive in one of the 22 states with photo enforcement. But relief from the increasing number of false alarms makes GPS models worth the price regardless of where you drive. 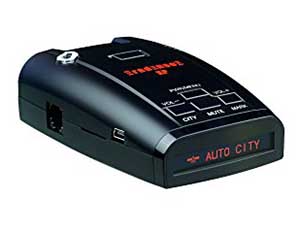 Radenso XP warns of red light and speed cameras. It also advises if you're over the limit.

Escort models with GPS constitute the upmarket segment and include the Escort Passport Max 360 and Escort Redline EX. Both are dual-antenna models with the Max 360's pointing fore and aft, allowing it to indicate whether the threat is coming from the front or back. In the Redline EX both antennae point forward to increase detection range.

In the $399-$549 class are two models with better performance than the Escorts: the Radenso XP and Radenso Pro M. Like other GPS-enabled models, both allow the driver to lock out frequently-encountered nuisance signals, particularly the radar-controlled automatic door openers at stores.

Conventional detectors alert on K band every time you cruise past the local Walmart. Those with GPS let you lock out the signal, telling the detector to ignore it and stay silent on future trips.

Some Escorts can decrease sensitivity automatically at low speeds to cut false alarms. Called Speed-variable sensitivity, it tracks vehicle speed and dials back sensitivity when it isn't needed. It also lets the user adjust the onset of red light camera alerts, so the driver won't be pestered prematurely.

The better models also depict what type of camera is being encountered: red light or speed.

An Escort displays the distance to the camera, counting down in hundred-foot increments. When linked to the optional Escort Live system it also shows the posted limit. 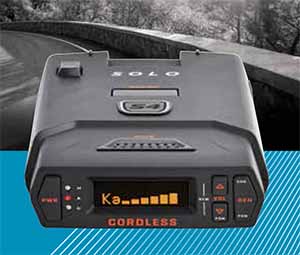 The battery-powered radar detector can be invaluable if you're frequently driving other people's vehicles—rental cars, for example. Other candidates for a cordless radar detector are those who prefer not to have a power cord cluttering up the cockpit.

Motorcycle riders are another market for the cordless, finding favor with the freedom from power cords.

One model, an Escort, can be used with a power cord to allow operation should the batteries die. But don't expect a power boost when it's hooked up to the car's electrical system: performance stays the same.