Escort Redline 360c vs. Escort Max 360c vs. Valentine One

Escort Redline 360c (left) has triple antennas—two front, one rear. Escort Max 360c (center) and Valentine One (right) have one front and one rear antenna.

Escort Redline 360c (left) has triple antennas—two front, one rear. Escort Max 360c (center) and Valentine One (right) have one front and one rear antenna.

What's the best radar detector? Many define best as the one with the longest range, the distance from which a radar detector can ferret out police radar. Some judge by price, figuring that a higher tariff equates to better protection.

Three models that seem to garner the most buzz are the Escort Passport Max 360c, the Escort Redline 360c and the Valentine One.

Three models that seem to garner the most buzz are the Escort Redline 360c, Escort Passport Max 360c and the Valentine One.

Of this group the Redline 360c is unique in having three radar antennas—two front, one rear. The Valentine One (V1) and Max 360c have dual antennas, one front, one rear. All three indicate which direction a threat is coming from.

Curious to see which design philosophy produces the best radar detector, we spent days on the road with each. Here's what we found.

The Passport Max 360c ($649 MSRP) is a high-end Escort with a rear radar antenna and both Wi-Fi and Bluetooth. It replaces the Max 360 which used the same platform and had similar features save for the Wi-Fi.

Like the Redline 360c, its windshield bracket attaches to the detector magnetically, making short work of installing or removing it.

The Max 360c has a large footprint and with two metal antennas, it's also heavy. Housed in a two-tone case, it's controlled by six top-mounted buttons.

Upscale features include Auto Learn which automatically locks out nuisance signals like radar-controlled automatic door openers. Drive past one a few times and it's automatically stored to memory. Next time you drive past, there's no alert.

With front and rear radar antennas, the Escort Passport Max 360c lights an arrow to point toward a threat.

Built-in Bluetooth allows the Max 360c to link to the Escort Live app without using a cellphone. This gives drivers a heads-up on nearby police activity.

Built-in WiFi enables the Max 360c to update itself wirelessly, a feature shared with the Escort Redline 360c.

In Spec mode the Max 360c displays the frequency of two radar signals, in gigahertz, one for each antenna. Instead of a generic Ka band it might display, for example, 34.706 for the front antenna and 34.729 in back. The information can be useful for those able to interpret it.

Road speed is displayed and—when linked to the Escort Live app—the posted limit as well. This can help dodge a speeding ticket. 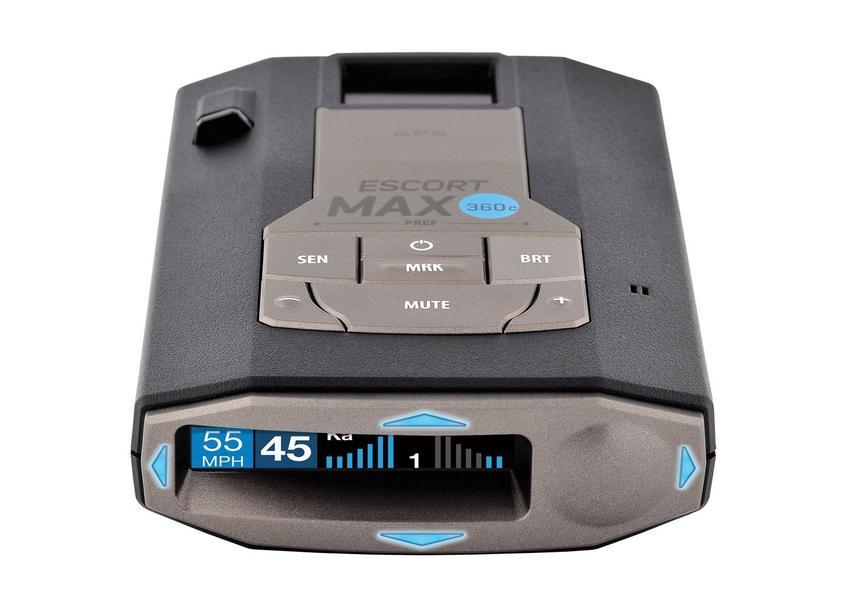 The directional arrows are generally accurate—when approaching a radar the front spots it and triggers an alert, once past the rear arrow lights up as the rear antenna spots it. In comparison to the Valentine One, we found that the Max 360c is more accurate in its reporting. Particularly in town, a single radar signal is generally reported as one threat. In contrast, the V1 not infrequently shrieks alerts of up to nine simultaneous threats, all generated by the same radar source.

The Redline 360c is housed in a black case and controlled by six top-mounted buttons. The four primary buttons are backlit to make them easier to find at night.

A clever windshield mount attaches to the detector magnetically and hangs onto the glass tenaciously.

The small OLED display is used by other Escorts including the Max 360c. It's densely packed with images and tiny text. Although colorful and capable of displaying graphics, the OLED unfortunately lacks the visual punch of an LED. As a consequence, on sunny days the display can get washed out by the sun.

Like the Max 360c, the Redline 360c has Wi-Fi, enabling it to link without a cellphone to the Escort Live app, a crowd-sourced ticket-avoidance network. The system broadcasts warnings of nearby speed-enforcement activity and helps keep tabs on the enforcers.

Unlike the V1, the Redline 360c has GPS and Auto Learn, same as the Escort Max 360c. This allows the detector to recognize and automatically lock out nuisance signals after passing them a few times. Escort patented this feature and to avoid infringement, other manufacturers require the driver to perform the task manually. They also limit the number of locked-out locations—200 for Radensos; only 100 for Unidens.

The Escort Redline 360c can be used as a set-and-forget device while it also appeals to the enthusiast driver. It has class-leading radar performance and a high level of sophistication. The ability to automatically lock out nuisance radar signals makes it a good choice for drivers weary of being bombarded by false alarms. And the arrows pointing toward a threat will be an added attraction for many.

The Valentine One is a familiar face and has been a contender in a dozen of our shootouts since it was introduced in 1991. It has received a few updates—laser detection in the mid-nineties, a revised circuit board in 2007 and sporadic software tweaks—but is otherwise unchanged from the original.

The V1 remains focused on performance rather than features. There's no auto mute, no selectable band defeat or GPS, for instance. A routine task like shutting off X band, which has nearly disappeared in this country, takes about 12 seconds in an Escort and can be done while driving. Doing the same with a V1 requires an Internet search followed by an extended session of button-pushing. Neophytes may find the process most safely done at home.

All operations are controlled by a rotary multi-function switch that handles audio volume, muting and operating mode. Using a single control conserves space but slows the pace considerably. A change of operating modes requires a leisurely 2.1 seconds, for instance, while both Escorts accomplished that task 10 times faster.

The front of the matte-black housing is dominated by large red arrows that depict radar direction. The bright LEDs are readily seen during daylight and while a photocell dims them at night, they remain visible for hundreds of feet to the rear. This tends to attract curious cops. Many detector-poor drivers also seem to find the arrows irresistible, drawn near like moths to a flame, often tailgating and refusing to back off. A concealed display ($39) is necessary to kill the light show after dark and lessen the come-hither effect.

We found that the V1 can be detected by the Spectre radar detector-detector at a considerable distance, making it a poor choice for those who drive in no-detector areas.

The Bogey Counter displays up to nine simultaneous threats. In town we found it a bit overwrought, often screaming warnings of four or more threats in reaction to one radar signal.

The Bogey Counter displays up to nine simultaneous threats. In town we found the feature a bit overwrought, often screaming warnings of four or more threats in reaction to one radar signal.

For the directional arrows of the Radar Locator to work accurately the detector must be mounted mid-windshield, with a clear view front and rear. We found it to be generally accurate in open country but it can get confused in town, the arrows lighting up randomly.

The V1's radar response is faster than either of the Escorts'. This doesn't allow much time to analyze a signal and not infrequently, it gets it wrong. The result is more false alarms than we'd prefer, particularly in town.

With its hair trigger, we found the Valentine One to be happiest on open highways where fewer radar sources can help to keep it quieter. But it's also prone to detecting Blind Spot Monitoring radar in passing cars and barking K-band alerts in response.