How the pollsters fabricated the favorable approval ratings 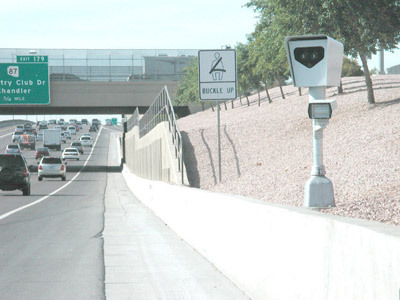 At a 2010 Arizona House of Representatives hearing on a bill to remove the speed cameras saturating Arizona highways, infuriated citizens lined up around the block to testify in support of the measure. With a single exception, they wanted the cameras gone.

Yet barely a year earlier a poll conducted by Public Opinion Strategies said that 63 percent of Arizonans favored speed cameras. This begs the question: Where did those glowing poll numbers come from? After poring over stacks of documents, some obtained via Open Records Act requests, the explanation clearly lies in how the poll was conducted.

The reality of the public opinion poll is that it's rarely done in the public interest. Polls are expensive, not something done on a whim. Whoever's picking up the tab has an agenda and plans to use the poll to promote an issue, a policy or cause, sometimes a political candidate.

ATS has thousands of red light and speed cameras in service with hundreds of municipalities nationwide. And it has a history of producing opinion polls showing lopsided support for its speed cameras. But are these polls accurate?

The federal agency is huge fan of red light and speed cameras. "FHWA is promoting red light cameras as one of its identified priority, market-ready safety technologies" its mission statement reads in part. For cities like Scottsdale, the FHWA document provides a step-by-step blueprint for establishing a photo enforcement program. Among its key recommendations:

Scottsdale appeared to dutifully follow these guidelines, including the generation of public opinion surveys as evidence of citizen support for its cameras. But there were risks. If a survey were conducted by an experienced, competent and ethical public-opinion survey firm, there was no guarantee it would generate favorable results.

For assistance Scottsdale city officials turned to their photo enforcement vendor, American Traffic Solutions. The firm had just signed the first of several contracts with Scottsdale and stood to make millions from Focus on Safety. It's reasonable to assume that ATS was keen for a public opinion survey showing strong support for the program.

"Three key criteria influencing the accuracy of a poll are how the questions are worded, the order in which they're asked and the number and form of alternate answers."
Source: 20 Questions a Journalist Should Ask About Poll Results, Gawiser and Witt

Impressive numbers to be sure. And an analysis of the survey shows just how these numbers were conjured up.

According to 20 Questions a Journalist Should Ask About Poll Results by Gawiser and Witt, key criteria influencing poll results: 1. How the questions are worded, 2. The order in which they're asked and 3. The number and form of alternate answers. "These should be fair and unbiased, presenting a balanced set of choices. And they should be asked in an order that does not influence the response," the authors note.

The BRC poll shows clear evidence of questions designed to elicit a particular response. And the order in which they are asked is highly suspect. For example, the first question asked:
"As you know, Scottsdale has grown rapidly in the past few decades and this has resulted in a growth in automobile and truck traffic in the community. In general, would you say each of the following are [sic] very serious, serious or not serious problems in Scottsdale these days:

Not surprisingly, 83 percent of respondents felt these were serious or very serious problems. Having identified the "problem"—speeding, reckless driving, red light running and accidents—the pollsters next asked if:
"...stricter enforcement of traffic laws in Scottsdale would reduce or not reduce [the problem]." An average of 73 percent agreed it would help.

The next survey question asked if the people were aware of "photo radar or radar speed cameras". Those who responded in the affirmative were asked:

Any of these shenanigans would qualify this survey as a self-serving promotion of photo enforcement, made to appear as a scientifically-conducted public opinion poll. But it was to be the first of many such surveys by BRC for its clients, photo enforcement vendors—ATS and Redflex—and the city of Scottsdale.

Scottsdale apparently wasn't satisfied with the survey's reported 55 percent approval rate for photo enforcement. To remedy the situation, it rolled out a massive publicity campaign, feeding stories to a compliant media which also generated editorials and op-ed pieces, nearly all of them favorable. The sole major local daily paper, the Arizona Republic, quickly took up the cause, printing editorials in support.

After the media blitz, BRC gave the 1997 survey a tune-up. Two important new questions were added. As before, the pollsters first established the alleged problem—speeding, red light running, collisions—before presenting the solution: photo enforcement. But then the people were asked:
"As you may know, studies by the city of Scottsdale show that collisions are down by 4% citywide and 20% where photo radar or red light cameras are in use. In light of this, are you more favorable towards the use of photo radar and red light cameras?"

This is a statement masquerading as a question. And it clearly is intended to elicit a favorable response. Not surprisingly, hardly any of the respondents were in favor of more collisions. For this question the approval rate for photo enforcement soared to an average of 92.5 percent.

This 1997 ATS/BRC poll reported a 75 percent approval rate for photo enforcement. The new format was so successful it was repeated nearly every year, unchanged, until 2006, often paid for by ATS and Redflex (the camera vendor that took over the Scottsdale contract from ATS) and distributed by Scottsdale. It reliably returned the same high approval rate each year. 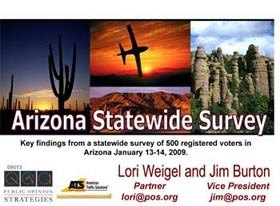 The BRC poll would receive another tune-up in 2006. It was fortified with additional leading questions and tailored to show overwhelming support for the city's campaign to install speed cameras on Loop 101.

Those survey results have since been passed around the world by the city of Scottsdale and the State as proof that the public, by a two-thirds majority, approves of photo enforcement. It was also the justification for the short-lived photo enforcement program that blanketed the state with speed cameras.

That program—the one the polls assured us that everyone wanted—so infuriated the populace that the cameras were removed two years later. Mysteriously, the claimed 66% of Arizonans in favor of cameras had disappeared almost overnight.

In the January 2009 ATS poll, conducted by Public Opinion Strategies, (POS) the results said that 63 percent of the state's citizens supported the continued use of speed cameras on state highways. Some 69 percent favored the use of cameras by local police departments and 84 percent thought red light cameras were a great idea. But this poll had all of the flaws as those conducted by BRC, plus some new ones.

Picking the poll group "... is the bedrock of mathematical reality," according to Gawiser and Witt. "When the chance of selecting each person in the target population is known, then and only then do the results of the sample survey reflect the entire population."

The way Public Opinion Strategies cherry-picked its survey group, the poll results were predictable. Some highlights:

Selecting the survey group is crucial. Historically, for example, females view cameras more favorably than men. Inflating the number of females in the group by four percent and decreasing the percentage of males by the same amount inflated the poll's approval numbers.

Those aged 18-24 are less likely to be registered voters but more likely to dislike cameras. Adding the registered-voter requirement meant that a lot of negative opinions went unrecorded.

The size of the age groups was wrong as well. Seven percent in the survey group were ages 18 to 24, for example, and 37 percent were age 55 and older. Yet the most recent U.S. Census report showed that 18-24 year-olds accounted for nine percent of the population while the 55-plus segment accounted for only 21.7 percent.

These discrepancies matter. Previous Arizona polls showed that almost 86 percent of drivers age 24 and younger disapproved of photo enforcement. Drivers 55 and older were the most supportive, with nearly 76 percent approving. By under-representing the 18-24 group by 23 percent and over-representing the 55-up group by a whopping 70 percent the approval rate soared.

To achieve the last two steps, the POS pollsters took a highly unorthodox approach. First, they asked whether "... the Department of Public Safety should or should NOT continue to use speed cameras to ticket drivers who exceed the speed limit by eleven miles per hour or more" 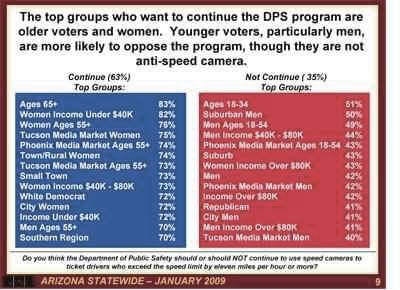 We asked Public Opinion Strategies partner Lori Weigel about the stipulation that speeding tickets be issued only for violations at 11 mph or more over the limit. Wouldn't the approval rate decrease if the 11 mph threshold hadn't been mentioned? "I would assume they would be lower on that," she agreed.

Then the survey's big question: "Which [of two statements] comes closest to your own opinion. Do you agree more with:

"People who support the use of speed cameras because they reduce the number of speeders and make Arizona's highways safer than just using police officers. Since the cameras were installed, collisions and fatalities have dropped significantly in the Phoenix area alone. Besides, photo enforcement uses no tax dollars. It's totally funded by violators.

(or do you agree more with...)
People who oppose the use of speed cameras because they say cameras are not here for safety. The cameras are there to generate revenue for the government. This is simply another tax on hard working Arizonans. Police officers should be the only ones authorized to issue traffic tickets. Besides, the use of cameras infringes on drivers' privacy and civil liberties."

This is another instance of poll-rigging. The first statement falsely claims that speed cameras:

In the second statement opponents merely "say" or allege that:

Sixty-three percent weighed in on the side of reduced speeding, fewer deaths and collisions and safer highways—with no new taxes. Big surprise.

An objective observer might conclude that the more recent American Traffic Solutions poll suffered from the same lack of credibility as its predecessors. As the experts caution, always consider who paid for the poll and their agenda when reviewing the poll numbers.