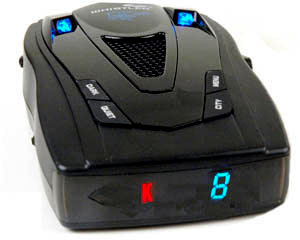 When Whistler rolled out the Pro 68SE it proved almost identical in appearance to the Whistler Pro 78SE, but priced considerably less. Our past tests show the Whistler Pro 78SE to be a top performer at its price point. Naturally we were curious to see how much performance and utility Whistler sacrificed in the Pro 68SE to get its street price down to less than a C-note. To find out, we spent a few months driving with the Pro 68SE in a variety of environments. Then we tested it at our two desert test sites.

On the road, it's an easy piece to live with. The all-black housing is mercifully devoid of chrome or brightwork, substantially reducing annoying reflections in the windshield on sunny days, an attribute shared with the Whistler Pro 78SE, XTR-690 SE and XTR-695 SE.

Unlike its big brother, the Whistler Pro 78SE, the Whistler Pro 68SE makes do without a text display, using icons of different hues to handle information-delivery chores. Operating modes are depicted by big blue letters while radar frequencies are pale green, red or orange for Ka, K and X band, respectively. Laser alerts are blue. Perhaps not quite as stylish as an LCD display, but just as effective.

Display brightness is adjustable with a dim/dark mode. A pair of blue, laser-bright LEDs also appears during alerts. These can be deactivated or set to flash either alternately or steady-burn.

Audio alerts are by tones that are sufficiently distinct to be easily interpreted. One of the more useful menu options is a pair of filter modes that progressively increases the degree of signal processing done before an alert is sounded. This slows the microprocessor's response time marginally but significantly decreases false alarms.

At our Straightaway/Hills test site the Whistler Pro 68SE displayed a commendable level of performance for a budget-priced radar detector. It detected X and K band radar from 5.4 miles away, the limit of the test course. It showed equal alacrity in spotting both of the most common Ka-band frequencies.

But this is still the best performance we've seen in a radar detector at this price point in the past decade. Although a no-frills model, there's enough content and performance to make the Whistler Pro 68SE well worth a look by those shopping for decent performance at a rock-bottom price.