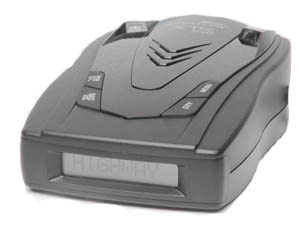 A radar detector-savvy bystander stopped to admire the new Jaguar XK convertible test car we were parking and commented about the battery-powered Whistler XTR-540 radar detector on the windshield. In a 90-grand car, he queried, why weren't we packing a high-end radar detector?

Fair question—and easily answered. Although it's a long stretch, a power cord can be routed from a detector on the Jag's windshield to the console's power point. But then it interferes with the air vents and dangles squarely in front of the big touch-screen LCD display. The last distraction needed was a heavy, coiled power cord swaying back and forth, interfering with access to the screen.

The convenience of cordless operation is the biggest selling point for a battery-powered radar detector—and the reason this Jaguar's windshield sported the Whistler XTR-540.

The Whistler XTR-540 runs on three AA rechargeable Ni-MH (nickel metal-hybride) batteries. An auto shut-off feature kills the power after a user-adjustable delay, meaning you won't come back to the car and find the detector down for the count. It will also operate with the included power cord which, once attached, also recharges the batteries. In contrast, the only other cordless radar detector, the $340 Escort Passport Solo S3, uses two AA alkaline batteries that can't be recharged.

Visual alerts are conveyed by a blue-backlit LCD text display whose backlighting is adjustable to a variety of configurations. For example, it can be set to appear briefly during alerts and mode changes and remain off the rest of the time to save battery power. Or it's adjustable to a dim continuous setting, going full-bright during alerts, with several other combinations possible.

A menu of preferences allows the user to tailor operation to personal preference. Three sets of audible alerts are available, and for bass-heads with megawatt stereos, visual alerts can be bolstered by a pair of laser-bright alert LEDs that are tough to miss, even in bright sunlight.

Any radar band or laser detection can be deactivated through the menu. For all but those who drive in Ohio or New Jersey—the only states where X-band radar continues to be found in any number—shutting off X band creates a much more peaceful driving experience. (Many automatic door openers use X-band radar, creating a major source of urban false alarms.)

Unique to this model of cordless radar detector, the Whistler XTR-540 offers two filter modes to limit false alarms. These progressively increase its resistance to common sources of falses, particularly the poorly shielded local oscillators of older Cobra radar detectors, which seem to be everywhere.

Radar detection range is good for a cordless model, and battery life proved sufficient for several days of driving. We found the Whistler XTR-540 to be the front-running model at its price point and well worth a close look by those shopping for the convenience of a battery-powered radar detector.