How Radar Detectors Can Warn of Red Light Cameras

How Radar Detectors Can Warn of Red Light Cameras

Some can also reduce false alarms 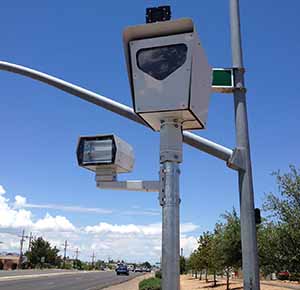 Redflex radar-controlled red light camera in Sierra Vista, AZ. The radar is the small black box atop the camera housing.

Adding GPS to radar detectors can give them some enticing capabilities. For instance, they can warn of red light and speed cameras. And most can lock out nuisance signals like the radar-controlled automatic door openers at the local Walmart. They can also display your speed; one will even show your altitude above sea level.

Since the detector knows how fast you're driving, Radenso and Uniden models can reduce false alarms by shutting off the audible alerts below a threshold speed. High-end Escorts reduce sensitivity automatically at low speeds with speed-variable sensitivity.

Red light camera alert strategies vary by manufacturer. Since only the main street at many intersections is monitored by cameras, Escorts and Radensos don't alert if you're on the cross street. In contrast, Unidens alert regardless.

Methods to reduce false alarms also differ. Upscale Escort models, for instance, lock out door openers automatically. Called AutoLearn, after a few encounters the signal is identified as bogus and locked out. In contrast, Radenso and Uniden models will lock out signals only after a button is pressed.

Automating the task doesn't come free, however. The least expensive Escort with this feature is the Max 3 ($399).

This may not be a big deal for some, but it's surprising how accustomed a user can get to the convenience.

Automating the task doesn't come free. The least expensive Escort with this feature is the Max 3 ($399).

To avoid infringing on Escort technology, Unidens allow a maximum of 100 signals to be locked out. Radensos have 200. Drivers who don't stray far from home probably won't need more than 200 but high-mileage users may benefit from Escort's greater capacity.

Escorts automatically vary the onset of red light camera alerts based on vehicle speed. Radenso models allow the user to choose the distance.

BSM radar shares the K-band frequency with police radar and its signal looks legit to detectors. These systems are everywhere, causing frequent false alarms. The problem has become so intense that some drivers disable K band to quell the din.