The BEL Pro 100 housing is of a unique matte-black, soft-touch material. It has the same satisfying heft and businesslike appearance of its Pro-Series step-up brothers; they differ only in features, price and particularly, in performance. 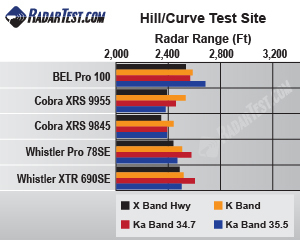 The BEL Pro 100 housing's rubber-like texture not only makes it feel like upscale hardware; with a glare-resistant finish and black buttons it's significantly more resistant to windshield reflections than many competing models.

The BEL Pro 100's red digital display is the same quality piece found on BEL's high-end models and we found it to be far more readable in sunny daylight than the OLED display found on some competing models.

In performance the BEL Pro 100 turned in very class-competitive scores, nearly identical to those of its forebear, the Vector 955. It lagged far behind on X band, not a big concern for anyone who doesn't drive in Ohio, where X-band radar remains in use by state police.

The performance gap increased another five percent when it squared off against the other dominant Ka-band frequency, 35.5 GHz, used by over 90 percent of the remaining Ka-band radar guns deployed nationwide.

A good overall showing and we remain impressed by the Beltronics Pro 100's performance, competitive feature set and user-friendly operation.