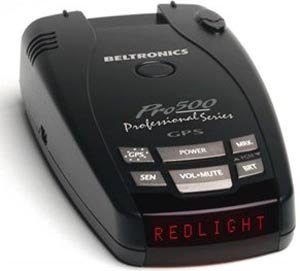 One of the best-kept secrets in the radar detector industry is the Beltronics Pro 500. Overshadowed by its heavily-hyped corporate siblings, few know that the Pro 500 is a cloned Escort.

Its housing is of a unique matte-black, soft-touch material rather than the glossy polycarbonate used by many Escorts. The rubber-like texture makes the Pro 500 feel like upscale hardware and more important, it doesn't reflect a mirror image of itself onto the windshield during daylight hours.

BEL added GPS to this high-performance detector to reduce false alarms generated by roadside sources, many of them radar-controlled automatic door openers. These operate on the same frequencies used by police radar and set off conventional detectors.

The Pro 500 will lock out these nuisance signals if the driver taps the Smart Cord mute button three times. Escorts do this automatically, a feature called AutoLearn.

The Pro 500 displayed better range at our Hill/Curve test site compared to the Cobra and Whistler models. But its K-band range in particular pales in comparison to that of its Escort iXc successor.

Although roughly comparable to the previous generation of Escort and BEL GPS-enabled models, the lack of features like AutoLearn and its lower performance make one of the Escorts a better choice for most drivers.