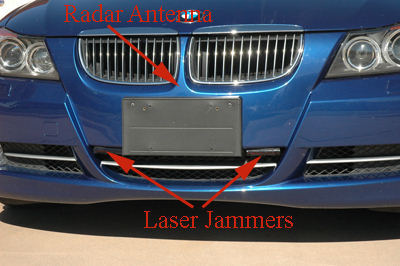 The STiR Plus radar/laser antenna is concealed behind the bumper of this BMW 335i.

Those who consider the Escort Passport 9500ci to be the best custom-installed remote radar detector are in for a surprise: the Beltronics STiR-Plus is its equal— in one respect possibly even better. Remember, BEL is an Escort company and the BEL STiR Plus is really an Escort Passport 9500ci. The two are nigh identical in appearance and performance.

Like its Escort twin, the STiR Plus is GPS-enabled, but it comes without the Escort's standard laser jammers. Those who feel vulnerable to the nation's 85,000-odd lasers can add the Laser ShifterPro laser "shifters".

The Escort and BEL siblings have the same radar-detection performance and have nearly identical features, including Ka-band segmentation. 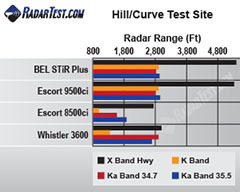 The BEL STi R is operated by a small surface-mounted control unit. It's backlit, making the important buttons easy to find and use at night. A second module with a small red LED display shows operating mode and other vital information.

In radar performance the STiR Plus turned in scores identical to those of the Escort Passport 9500ci. It was within feet of the Escort Redline, holder of our record in radar range. In a recent test the Escort spotted all of the radars from 14.37 miles away.

On the road, the BEL STiR Plus is almost supernaturally quiet. On daily commutes it rarely goes off and is nearly as quiet on highway trips. In all, a remarkable performance from what we christen the driver's tool of choice for combatting radar, lasers and red light cameras.