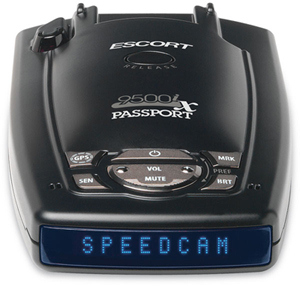 Introduced in 2007, the Passport 9500ix was Escort's first GPS-enabled model. Satellite technology allowed it to warn of red light cameras and lock out static sources of false alarms, like automatic door openers.

Escort has replaced the 9500ix with two models higher in performance and with more features. The Passport iXc ($449) now is the entry-level Escort with an equivalent feature set.

Also on offer is the Passport Max 360c ($649), a dual-antenna model with arrows that point toward a threat.

The top-mounted controls of the Escort Passport 9500ix are backlit, making them easy to find at night. On the side of the case a USB port allows updates of the Defender red light camera database.

Escorts can automatically lock out nuisance radar signals with the AutoLearn feature. Drive three times past the local Walmart door openers, for example, and the detector remembers not to alert the next time you drive past.

Users looking to speed up the process can do this manually. During an alert a double-tap of the Mark button adds a nuisance signal to the database. When the Escort is not alerting, pressing the button adds a location to the database, along with a choice of four types of location tags to later identify the type of threat. 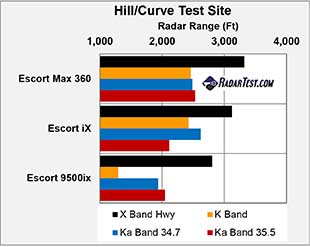 In contrast, to avoid patent infringement competing models require the user to lock out these signals manually. Automating the task may be convenient, but it's not free—the least expensive model from patent-holder Escort costs considerably more than, for example, the equivalent Radenso.

Considering its age, the 9500ix turned in reasonably good performance against X-band radar. But it lagged well behind the competition on the critical Ka band favored by state troopers.

Once the flagship Escort model, the Passport 9500ix has clearly been surpassed in performance by more recent designs, particularly some newcomers from Radenso and Uniden.