The Escort Passport iXc is an entry-level Escort with the GPS technology used by high-end radar detectors to reduce false alarms.

Its windshield mount attaches to the detector magnetically, an elegant solution and effortless process.

The Passport iXc has Wi-Fi and Bluetooth, simplifying the task of linking the detector with the Escort Live ticket-avoidance app.

It receives the corporate OLED display, which has drawbacks we've noted before. Among them are too much data crammed into too little space, tiny fonts and low contrast.

Most of the iXc feature set is shared with high-end Escorts including the Redline 360c. This includes the ability to lock out nuisance signals like radar-controlled automatic door openers. It will do this automatically after passing them a few times, an Escort exclusive dubbed AutoLearn. In contrast, competing models require the driver to do this manually and also limit the number to as few as 100 locations.

The iXc also inherits software that varies sensitivity according to speed, dialing it back automatically at low speeds when it's unneeded, to help limit false alarms.

Also included is an annoying Overspeed Alert. Factory-set at 70 mph, on every trip north of that speed a voice shouts—Overspeed!—and the speed display ominously turns red. Considering that the speed limit on western interstates ranges up to 80 mph, the feature is a needless irritation.

The speed nanny can be adjusted or disabled through the Preferences menu but a better idea would be to get rid of it.

The iXc is controlled by six top-mounted buttons with hardly any space in between. An average-sized finger can easily depress four of the six simultaneously. Except when using the oversized Mute button, the safest time to adjust the iXc is probably while the vehicle is parked.

The Ka-band segmentation feature divides this super-wide band into chunks, potentially for quicker response. But rather than the useful 10 segments offered by high-end models like the Escort Redline 360c, the iXc has only four. Three of these are used police radar, making deactivation of the fourth hardly worth the effort.

An Auto LoK setting chops K-band sensitivity by 65 percent to help reduce false alarms. A new IVT filter helps it to identify and ignore vehicular Blind Spot Monitoring (BSM) systems. These operate on the same K-band frequency as police radar and have become a huge headache for detectors.

Auto NoX shuts off X band to cut false alarms, a worthwhile move except in Ohio, whose highway patrol is the only one that still uses this ancient radar band. 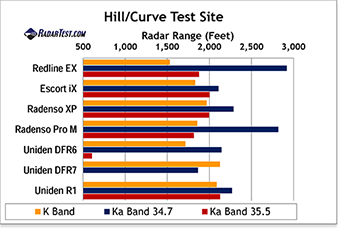 Ka-band radar (blue and red bars) is the most important, used by nearly all state police agencies.

The performance of the Passport iXc was measured at our Hill/Curve test site. Although it showed balanced radar performance, the Escort Passport iXc trailed the $249 Radenso XP in two of the three tests. On K band it lagged behind by 7 percent and on 34.7 GHz Ka band by 8 percent. Against 35.5 GHz radar the two were equal.

The Escort Passport iXc benefits from software that automatically recognizes and ignores non-police radar. On the downside, cramped controls and some annoying features could make it a less enjoyable traveling companion for some.

The iXc is probably best suited to drivers who prefer set-and-forget operation and minimal involvement with a radar detector. Used this way it capitalizes on its plug-and-play sophistication and advanced features.