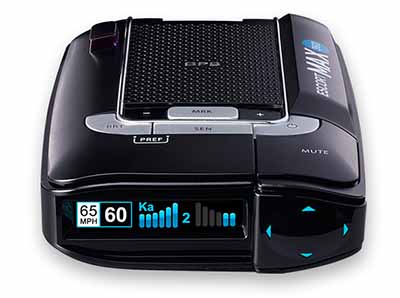 The Max 360 is a large, heavy radar detector. Housed in a black case, it's controlled by six top-mounted buttons. The four primary buttons are faux-aluminum and reflect annoying mirror images into the windshield when the sun is out. The upper housing is also festooned with large white graphics, which similarly cast reflections into the windshield.

The large GPS-style windshield mountattaches to the detector magnetically, an effortless process and an idea so good it's likely the competition is doing some head-scratching, wondering why they didn't think of it first.

With the addition of a rear radar antenna, the Escort Passport Max 360 illuminates an arrow to indicate the direction of a threat.

Internal Bluetooth allows the Max 360 to link to the Escort Live app on a cellphone.

It also sports a USB port for updates and a 3.5mm audio jack for stereo output.

Visual information is displayed on a small screen that's densely packed with images and tiny text. It uses OLED technology and washes out badly on sunny days.

The Max 360's LED directional arrows remain distinct in sunlight, but for everything else you'd better get used to depending on the voice alerts. The display makes the Max 360 best suited to drivers who prefer set-and-forget operation and minimal interaction with a detector.

Like its GPS-enabled siblings, the Max 360 automatically locks out most nuisance signals—automatic door openers in particular—after passing them on multiple occasions.

The Escort Max 360 has some unique features—directional arrows, for example—to justify its high price. It also has some annoying features like Overspeed Alert that begins shrieking at 70 mph and can't be disabled without consulting the manual and changing some settings.

The Max 360 has potential, although there are better-performing alternatives available, including a few from Escort.