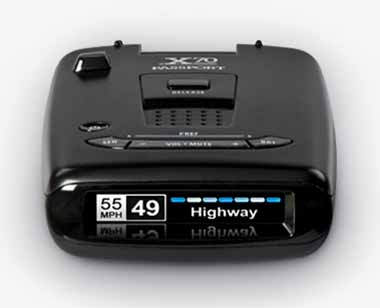 The Escort Passport X70 fills the slot vacated by the discontinued 8500 X50, the model whose 8500 forebear I christened "world's best" when I reviewed it for Automobile magazine. That 2001-vintage 8500 didn't have the longest range—a couple of pricier contenders from Beltronics and Valentine shared that claim—but at the time it raised the bar a notch in sophistication and user-friendliness.

Although the X70 uses a similar M4 platform and has a black housing like its predecessor, the cosmetic similarities end there. This new entry is larger in all three dimensions, for instance. Also, the X50 had a rotary thumbwheel switch on the side for power and audio volume, the simplest and quickest adjustment method I've seen. Other primary functions were handled by a pair of rocker switches on top and a big, front-mounted mute button. All of these were raised, making them easy to find and operate.

The newcomer has array of four buttons on the upper housing. The center button is assigned three functions—volume up, down and mute—a space-saving but slow way of handling these tasks. The buttons are recessed into the case, making them elusive and slow to operate. And there's no chance the power button will be pressed by accident; it's buried so deep that a Q-Tip can prove useful for operating it. 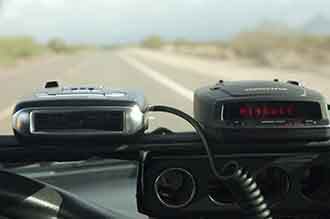 Escort Max (left) has an OLED display; Redline's is LED. Even at 75% intensity the Redline's display remains readable.

On the side of the case are an audio-out jack and USB port. The latter allows owners to install software updates. (The X50 was a fixed design and lacked a USB port; only the factory could upgrade its software.)

Aside from the X70's extra bulk, most noticeable is its different type of display. While the X50 used red LEDs, the X70 employs OLEDs. This technology has some advantages over LED, but it doesn't fare as well in harsh lighting conditions. On sunny days we often found the X70's display too washed-out to be legible.

This won't be a deal-breaker for those who rely on the unit's voice alerts for their primary source of information. But the low-contrast display becomes an issue when using the advanced user preferences.

In Spec mode, for instance, a radar frequency is digitally displayed, allowing knowledgeable drivers to tell at a glance whether a Ka-band alert can safely be ignored. But to be useful, the information has to be legible.

The Passport X70 offers a user preference aimed at the enthusiast driver, one missing on the X50: Ka-band segmentation. By chopping this extra-wide band into segments, drivers with encyclopedic knowledge of the radar frequencies being used locally can shut off unused Ka-band segments. This tells the detector to ignore some signals and in theory, reduces false alarms.

The X70 offers four Ka-band segments rather than the 10 found on enthusiast-oriented models like the Radenso XP. Unfortunately, these are too wide to be useful; shutting off any of them makes it likely that legitimate radar threats will be missed.

The X70 demonstrated excellent radar performance at our Hill/Curve test site. It trailed the front-running Max 360 by 25 percent on K band but on the all-important Ka band, the two were nearly equal.

The Passport X70 offers the same performance and extensive list of features as the departed 8500 X50. Enthusiasts willing to spend more will likely be happier with the upmarket Passport iXc, but budget-minded drivers willing to overlook the X70's poor user interface may find the Escort Passport X70 a worthy 8500 X50 successor.