Can the Internet and smartphones really beat speed traps? 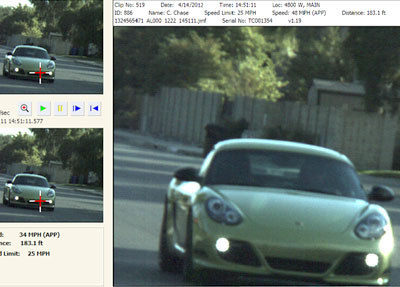 Head-to-head competition has a way of separating superior products from the wannabes. Trouble is, testing a system that combines the Internet community with a radar detector and a smartphone can be a bit daunting. This is particularly true when the product is new, with a user base still forming.

We were keen to compare two crowd-sourced ticket-avoiding products—Escort Live and Cobra iRadar. Both employ Bluetooth to link detector to smartphone, using the phone's GPS with a free app from the manufacturer. The smartphone controls the detector and the latter's alerts of radar and lasers are broadcast via the Internet. For others online, the alerts are displayed on a map; users can also upload alerts of speedtraps and cruising cops.

Our rules were simple enough. Drivers would be directed over a route past no fewer than 11 red light and speed cameras—not all of which posed threats—plus four laser speedtraps and five radar ambushes. The lasers and radar guns would be manned by volunteers who had received hands-on training.

The objective was to travel the route without getting nailed, depending on these two crowd-sourced systems to avoid the waiting enforcers. 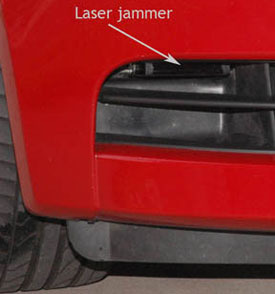 This BMW 135i sported two detectors plus a laser-jamming system.

Two teams were equipped with iRadar, three with Escort Live. One more team acted as a test control, equipped with nothing more exotic than their 20-20 vision.

The Cobra iRadar warned of 12 cameras, but only nine of those posed threats; the others either monitored cross streets or had been deactivated or removed, sometimes years previously. And the Cobra Aura camera database failed to warn of one camera that posed a threat.

Escort Live warned of 11 cameras, including all nine active ones, plus two that had been removed.

Two of the Escort Live-equipped drivers reported receiving warnings of our four Ka-band and single K-band radar speedtrap. Another reported five X-band alerts, seven K-band and a Ka-band—all of them in addition to our faux speedcops. The X-band alerts were door openers—his factory-fresh Escort 9500ix hadn't yet locked them out—although the rest were police radar. 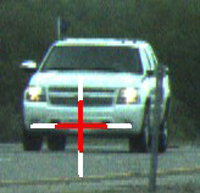 Laser-violation photo of the Chevy Silverado awarded the Bear Bait Award. It was bagged four times by our lasers, three times by radar.

Our third Escort Live user, the BMW pilot, also received no laser warnings from either his Escort Passport 9500ix or BEL (Beltronics) STiR Plus although he was targeted three times. But none got a speed on him; his laser jammers foiled each attempt.

He received four Escort Live alerts from our radar traps but curiously, claimed that none arrived until at least 15 minutes after another user had broadcast them. He logged two K-band alerts generated by passing local cops.

The results from the Cobra iRadar drivers were uneven. One reported 37 threats: 12 cameras, 18 radars, three speedtraps (none of them legit), plus three POP-mode radar alerts. He also received one strident alert that a train was approaching. This occurred near Fashion Square Mall in the heart of tony Scottsdale, miles from the closest tracks. The Train Approaching warning was caused by the Safety Alert System. 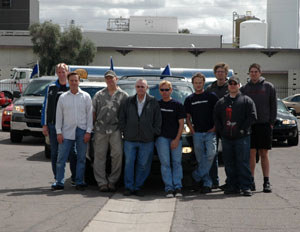 Although it reported three phantom speedtraps, this driver's Cobra iRadar missed all of our radar and laser traps. The lasers, however, nailed his Chevrolet Avalanche four times. Had he been speeding, he'd have collected at least three radar-based citations in addition.

The other Cobra iRadar-equipped driver reported similar results: lots of bogus radar signals and false POP-mode radar alerts plus several bogus speedtrap alerts from other users. Like the other iRadar contestant, the Cobra Aura database warned him of 12 cameras, only eight of which posed a threat. And it failed to alert to one camera that was legit.

We'd hoped for an easily-judged contest but faced with this bewildering jumble of data, we concluded that little had been accomplished. So we ran a second test.

In our second test Escort Live reported all 20 marked radar locations. It also stored these to memory, allowing later review, another feature absent in iRadar.

Cobra iRadar bleated warnings of six K-band radar traps and five on Ka-band. It missed the other nine, mainly because despite nearly putting a dent in our iPhone's touchscreen, iRadar refused to broadcast the alerts.

To be sure, the Cobra iRadar system is $130 MSRP, including its rudimentary detector, while the least expensive Escort Live system at present—using the excellentBeltronics (BEL) Pro 300 detector—is about double that.

But price aside, for those looking to dodge a ticket, we'd say that Escort Live is the better system.

For our second test we equipped a Lexus GS 350 F Sport with Cobra iRadar, plus an Escort Passport 9500ix linked to the special Escort Live Smart Cord. At a remote desert test site and using one product at a time, we cruised down an empty county road and, at one-mile intervals, triggered one of our radar units. When the detector alerted, we pressed the appropriate button to broadcast a warning. We used two radar units, a Kustom Signals DSR Ka-band and a Decatur GHS K-band, logging five warnings with each.

Some 20 miles later, we U-turned and retraced our path, waiting in turn for iRadar and Escort Live to show their stuff. After waiting one hour, we repeated the exercise. This test got accurate results, some of them a bit disappointing.

The Cobra iRadar system bleated warnings of six K-band radar traps and five on Ka-band. It missed the other nine, mainly because despite nearly putting a dent in our iPhone's touchscreen, iRadar refused to cooperate. As the radar alert faded, the screen returned to the dashboard view without acknowledging our requests. When we returned to these danger areas iRadar remained mute. This behavior was also noted by the iRadar drivers in our Radar Rally.

We noticed other weaknesses in the iRadar user interface. A verified Community alert is denoted by a red diamond overlaid on the map; if unverified, it's yellow. A blue diamond indicates a location where another user has decided that the alert is a false alarm. But as we revisited our marked radar locations, the occasions were noted only by a change in color of the dashboard display, from green to red. There was no audible alert. Anyone not staring intently at the iPhone would have missed every alert.

Cobra dubs this type of marked location a Community alert. Unless another user receives the same alert and confirms that it's real, it remains unverified and of low priority. Unlike with Escort Live, Cobra iRadar users must manually upload all threats except for laser ambushes, then await confirmation that the report has been accepted by the system. This seemingly innocuous action, we learned, is by no means a certainty.

Escort Live acts differently. For example, Ka-band alerts are broadcast automatically; no user action is required. X- and K-band reports and other advisories can be shared with a sideways swipe of the touchscreen. Given that a Ka-band alert is most likely the fuzz and X-band almost always an automatic door opener, this feature makes for fewer bogus alerts.

A radar alert can be locked out permanently with a right-to-left swipe of the smartphone screen. The action can be reversed by a swipe in the opposite direction. Essential information is overlaid on the map, including the elapsed time since the threat was first reported. It also counts down the distance as a threat is neared.

If the driver has selected the detector's Spec mode, the threat's radar frequency and signal strength are also displayed. Threat levels are color-coded: locations reported only once are red; if an hour passes without another report they become yellow and after two hours, they disappear.