The laser's pinpoint beam makes it target-specific and able to clock targets that radar will miss.
Note: The Escort Laser ShifterPro has been replaced by the Escort ZR5. The Escort Passport 9500ci and BEL STi-R-Plus have been discontinued.

New police speed lasers continue to appear, potentially giving the enforcers an edge in the ongoing electronic arms race with drivers. Not surprisingly, we figured it was time for a test of the latest laser jammers.

We tested against lasers representing nearly all of those IACP-approved for use by U.S. law enforcement. From LTI the UltraLyte 100LR, UltraLyte LRB, TruCam and TruSpeed S. From Kustom Signals: the Pro Laser 3, Pro Laser 4 and Pro Lite Plus. From Laser Atlanta-MPH the Speed Laser R and Speed Laser Torch. Last was the Laser Ally, from Digital Ally. (Designed by Dragon Eye Technology and also sold as the DragonEye by that company.)

The latter two are designed to outwit laser jammers while the hyper-fast PRF of the LTI TruSpeed S makes it equally difficult to combat. Learn more about how lasers work.

The business end of the Blinder, its laser jammer transceiver (head), measures 2.0 inches by 1.4 inches by 0.55 inch, the smallest of those tested. (Available in twin, triple or quad configuration.)

Its other major component is a multi-function box that houses the microprocessor and serves as a wiring interface box for the power supply and jammers. This also has a small speaker with a thumbwheel volume-control switch, plus LEDs for power-on and alerts, and a USB port.

Bristling with wires, it's certain to be buried under the dash to hide the clutter. Once installed, its status and alert LEDs can't be seen and the audio alerts are muffled.

The voice alerts helpfully identify the make and model of laser gun although we wish audio volume was higher.

The Blinder HP905 Compact's USB port permits online firmware updates to meet future threats. Also offered is a menu of user preferences like sunlight sensitivity and the number of seconds the jammer transmits during attacks.

We found updating the Blinder HP905 Compact to be a straightforward process. After connecting the interface module to a laptop with a USB cable, we downloaded and opened the Blinder Live Update app, verified that the firmware rev was the most recent, and then set the user preferences, a 90-second task.

The Escort comes with two jammers; two additional jammers are optional. Its largest component is an interface box that also contains the microprocessor and a small warning speaker. The jammers' telephone-style connectors and wiring harness plug into this. There's also a DB9 connector for firmware updates.

The Escort Laser ShifterPro jammer transceiver measures 3.1 inches wide, 1.0 inch deep and 0.625 inch tall. A waterproof DIN connector on each jammer wire allows one transceiver to be replaced—without having to spend a day ripping the system out of a vehicle.

A small green LED in the on/off rocker switch glows steady-green to indicate power-on and it flashes during attacks. It washes out in sunlight and its location—buried under the dash in a typical installation—does nothing to improve its effectiveness.

Voice alerts announce laser encounters and identify the model of laser gun. Audio volume is adjusted with a screwdriver, a method less elegant than the Blinder HP905's simple thumbwheel control.

User settings include the Sun Interference Alert (SIA), a sensitivity adjustment to reduce false alarms. Jamming duration can be set from 1 to 31 seconds or unlimited; jam restart time (a pause after its last jamming signal ended) can be increased from 15 seconds (default) up to 120 seconds, in 15-second increments.

A Laser Gun Enable menu option allows selective jamming of Leivtec, Riegel FG21-P, TraffiPatrol XR or Laser Ally guns. (None but the last is used in the U.S.) When activated, an Unknown Gun Alert instructs the Escort Laser ShifterPro to issue a generic alert when it can't identify the laser model.

Unlike the departed Escort ZR4 laser jamming system, the Escort Laser ShifterPro is stand-alone, designed to operate in parallel with a radar detector. (The Escort Passport 9500ci remote (built-in) model and its twin, the Beltronics STiR Plus, receive bespoke versions that are integrated with the system.)

The K40 laser jammer is intended to be incorporated into a K40 remote radar detector system such as the Calibre, using the detector's alert system. Like the other jammers tested, it has an interface module that accommodates up to four jammer heads.

Unlike the Blinder and Escort, the K40 Defuser G5 is a fixed design and its firmware can't be updated to counter new threats.

The K40 Defuser G5 jammer head is 5.1 inches wide, 0.65 inch tall and 0.88 deep. Although commendably slim, it was the widest of the group, limiting mounting options.

Supplied with the K40 Defuser G5 are universal mounting brackets as well as a polycarbonate license plate bracket, the top of which accommodates a single jammer. This simplifies installation for a one-jammer front system but makes it easy to spot and susceptible to damage.

The K40 Defuser G5 clearly isn't designed for use as a stand-alone laser-jamming system—ours arrived with no documentation for installation or operation and none was available on the K40 website.

How We Installed the Laser Jammers

How We Installed the Laser Jammers

We took care to properly align the jammers using bubble levels. Unfortunately, many installers don't bother, which makes the jammers ineffective. We'd attribute this to a mix of ignorance and poor workmanship. Learn more.

Lasers usually love big targets, but our dark blue Ford Expedition proved to be an exception. Most of the lasers could clock it only at very short range.

Lasers usually love big targets, but our dark blue Ford Expedition proved to be an exception. Most of the lasers could clock it only at very short range.

Testing took place over a three-day period in Mesa, Arizona. Two target vehicles were used, one small, the other large. Learn more about how we tested the laser jammers.

How We Ranked Them

How We Ranked Them

Each laser jammer was rated in six categories. The first five had a maximum of 10 points each; the last had a possible 50 points.

The K40 Defuser G5 was awarded above-average points for its mounts and brackets and five points in each of three other categories.

Performance was disappointing. It alerted to the most widely used lasers—Kustom Signals Pro Laser 3 and Pro Laser 4; LTI UltraLyte 100LR, Stalker LR—but jammed none of them. (On one pass it briefly blocked the Pro Laser 3 at extreme range, but only on the SUV; the Kia remained easy meat.) The MPH SpeedLaser R could clock the Expedition at 1,742 feet and unfailingly nailed the Kia at any range we tried.

The Defuser G5 couldn't detect or jam the LTI TruSpeed S, or the MPH Torch in Stealth Mode. It detected the lethal Laser Ally but couldn't jam it; same for the widely used LTI UltraLyte 100 LR.

The K40 Defuser G5 earned five points for momentarily affecting a few of the laser guns. But with its uniformly dismal performance, those shopping for laser protection would be wise to look elsewhere.

The Blinder HP905 equaled the Escort Laser ShifterPro in the quality of its installation hardware and outscored it in the ease of updating its firmware. It lost one point to the Escort in controls and operation, alert system and user documentation. 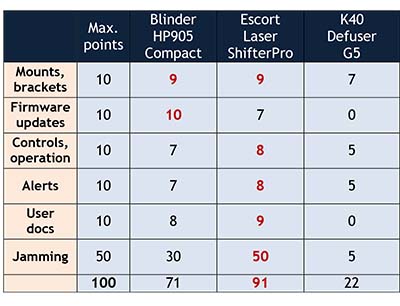 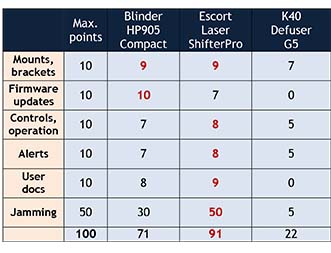 In an earlier test the Blinder HP905 jammed all but one of our lasers. But this time around it was unable to detect or jam two of the newer models.

In fairness it should be noted that the Speed Laser Torch remains a comparative rarity on U.S. roads and it must be used in Stealth Mode to outwit most jammers. And while the number of Laser Ally units in service has yet to reach a critical mass, an encounter with either laser is likely to end badly.

The Blinder displayed some compelling virtues, but significant gaps in its protection envelope relegated it to runner-up in this contest.

The Laser ShifterPro earned praise for the thoughtful inclusion of a waterproof cable connector near each jammer transceiver. Aside from simplifying installation, it allows a jammer to be replaced without having to strip its wiring harness from the vehicle. This is a big deal, particularly when the meter's running at a shop labor rate of $120-plus per hour.

The Laser ShifterPro also scored higher than the Blinder HP905 for the greater volume of its audible alerts. A laser attack is bad enough; missing an alert because the warning is drowned out by the car stereo is a lot worse.

The Escort lost points for its clunky non-USB Internet connection and less-refined method of audio volume adjustment. Its low-visibility green power-on LED, buried in the power switch, was judged unimpressive as well.

But its remarkably consistent jamming performance gave the Escort the win in this match. It jammed all of our lasers down to point-blank range, regardless of vehicle size or color.

How the laser jammers were installed (continued)

We spoke recently with a senior installer at a Texas BMW dealer who told us he'd been installing laser jammers for years hidden behind bumper covers. He expressed disbelief when we told him that without a clear a view of the road, a laser jammer can't jam anything.

This installer's ignorance isn't uncommon. Few understand the differences between LIDAR and RADAR technology and many assume that a laser beam passes easily through plastic, just like microwave radar.

Laser jammer kits include bubble levels and directions for alignment, both frequently ignored. Jammer alignment is critical since the pinpoint light beam is dueling with a similar pinpoint being transmitted by the laser gun. If the jammer can't spot the incoming laser beam, it does nothing.

But we routinely see installers aim laser jammers into the ground; many splay the jammers toward the outside, like they're adjusting the beams of driving lights.

And hardly any installers test finished systems, no surprise when $3000 police lasers can't be found on the shelf at the local Walmart.

The labor cost of a proper installation isn't cheap—six hours to install two each in front and rear is considered quick—but plenty of customers go with the lowest bid. Small wonder when a shop hears from an unhappy customer who's nailed by a laser-toting cop.