The test procedures, equipment and vehicles we used 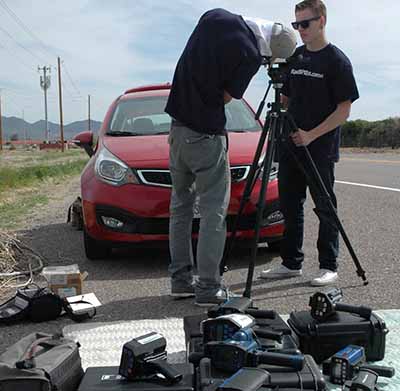 Testing was conducted with a video camera shooting through the Head-Up Display (HUD) of the speed lasers, allowing post-test analysis of each run.

Testing was conducted with a video camera shooting through the Head-Up Display (HUD) of the speed lasers, allowing post-test analysis of each run.

Our laser jammer test was conducted on a little-traveled two-lane suburban road in Mesa, Arizona. Die-straight and almost perfectly level, a 2,500-foot-long section of the road was used. Before testing we verified that no ambient 904-nanometer-frequency light sources were present, eliminating any possibility of interference.

Traffic volume during testing averaged about eight vehicles per hour. Testing was halted when other vehicles briefly blocked the laser's line of sight.

Each laser was rested atop a shooter's sandbag rest placed atop a Bogen-Manfrotto heavy-duty film camera tripod. This limited operator shake and removed that variable from the equation. Hand-holding lasers during a test may be more real-worldly, but it also makes it impossible to compare the results.

Hand-holding the laser makes each run different; operator shake introduces a propensity for spraying the vehicle with the laser beam, reducing target range while making the jammer's job easier. By systematically reducing these variables, a meaningful, side-by-side comparison of jammer performance over dozens of runs is made possible.

The police sport-utility vehicle is dark blue and has no decorative front-end chrome, only a black Squad Shield on which are mounted two pairs of red/blue halogen emergency lights.

Before installing the laser jammers, we used our four longest-range laser guns to find out how far away they could nail each vehicle. Two sets of runs were conducted, one with no front license plate installed, the second with the vehicles wearing a California plate.

Although the Expedition offered nearly half again more frontal area than the Kia, when wearing no front plate it proved to be the more laser-unfriendly target. By targeting a headlight, the four lasers belatedly got its speed at an average range of 1,732 feet. The same lasers caught the Kia at 2,152 feet on average, also using a headlight as the point of aim.

After installing the highly retro-reflective California front plate, the lasers tagged the Expedition at an average range of 5,513 feet, the Kia at 5,687 feet. Both numbers are far beyond the target range seen in typical encounters—about 800 feet in town and less than double that in open country.

Searching for a compromise configuration on the Expedition, we fabricated an aluminum plate measuring 18 inches by 6.25 inches. This was covered with adhesive-backed Mylar chromed tape, then the plate was installed vertically on the Squad Shield in front of the red/blue halogen emergency lights. It was hoped to simulate the greater reflectivity of civilian-spec SUV and F-Series pickups, most of which sport chromed front bumpers and grilles.

Not surprisingly, average laser target range on the Ford ballooned to 3,632 feet, very similar to the ranges we've recorded on late-model Ford pickups and SUVs. We elected to retain the reflective plate for this series of tests.

Not that it made a difference once our California front license plate was installed. Even if we covered the added chrome with black gaffer tape, the California plate alone was enough to double target range. Some of the lasers now could tag the Ford from over one mile away, the Kia even farther.

Orange traffic cones were placed at roadside 2,300 feet and 2,000 feet from the laser guns. Each run began from the farthest mark, the driver accelerating to 25 mph and giving a 3-2-1-Mark! countdown on the UHF radio as he passed the 2,000-foot cone. The laser was then fired continuously, as it is by a police officer, first targeting the grille area. If no speed appeared after a few attempts, aim was shifted to a headlight and alternated between that and the center mass until a speed was read. Three runs were performed and the results then averaged.

The laser jammer's task is easiest when it's trying to protect a dark vehicle wearing no front license plate. Lasers dislike dark colors and much of the laser beam's energy is attenuated, leaving less to reflect back to the laser gun. If there's no chromed grille for the laser to target, so much the better.

But rather than hoping for the best, it's prudent to plan for the worst. For this reason we focused on the laser jammers' performance when the target vehicles wore front license plates. And as the test unfolded, it was apparent that the better jammers delivered consistent results regardless of the vehicle's reflectivity. We could have stacked the deck in the jammers' favor, but we chose real-world conditions instead.