The phrase affordable remote radar detector is perilously close to being an oxymoron. This is a market where the Escort Passport Max CI weighs with a three-grand pricetag. The only low-priced remote is the Whistler Pro 3600.

The Whistler Pro 3600 comes with a waterproof radar/laser antenna that mounts in the grille area, plus a speaker module, tricolor alert LED and control/display unit. The LED color is programmable—red, green or yellow—and it can be set to blink or steady-burn during alerts. It has a second, optional function: With engine off, it can be set to blink slowly, emulating a car alarm and giving pause to thieves.

Optional components include a second, rear-facing radar antenna, a remote laser-detection module and a GPS antenna. With the latter installed, the Pro 3600 warns of red light and speed cameras; it also allows the detector to offer a number of upmarket features. We'll look at some of these a bit later.

The Whistler Pro 3600 employs two techniques to keep a lid on false alarms. Four filter modes progressively increase signal-processing duration, allowing the microprocessor additional time to interpret incoming signals. These are accessible through the user preference menu and can take some time to adjust. We suspect that many will use City mode to more quickly achieve what is largely the same result.

One feature that pays dividends in ticket-avoidance is RSID. Radar Signature Identification allows the driver to tell instantly if a Ka-band alert demands instant action or if it can be ignored, a big advantage. 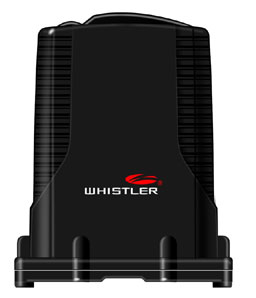 We installed the Whistler Pro 3600 in a new Lexus Ct200h and found it to be a straightforward 45-minute task. The radar/laser antenna was hung from the radiator support bracket by the supplied brackets and its wire was run through the firewall using an existing grommet.

Since our system included the RLC-360 GPS module ($129.95 suggested retail), we used some of the advanced features offered by its presence. One was the Auto Quiet low-speed threshold, which allows the driver to enter the speed above which the Auto Quiet feature becomes active. Auto Quiet is Whistler-speak for auto muting; five seconds after an alert begins the detector automatically lowers audio volume. At speeds below that threshold, when the threat level is minimal or nonexistent, audible alerts are always muted, reducing the clamor.

Escort employs a more elaborate method of quelling urban false alarms with Speed-Variable Performance, which varies sensitivity automatically based on speed. But like many desirable GPS-enabled functions, this one's off limits to Whistler and other competitors by virtue of Escort's control of the key patents.

Adding the optional GPS module also allows the Whistler Pro 3600 to warn of red light and speed cameras. The distance-to-camera threshold is factory-set at a 400-foot radius; it can be adjusted to 200 or 600 feet.

GPS also enables the Pro 3600 to offer a trip computer function that records and displays elapsed time, mileage and the top speed achieved during the trip. One feature we could live without is an overspeed warning, factory-set at 80 mph. Stray over that and you'll be greeted with an urgent admonishment to slow down. This can be raised as high as 120 mph but it can't be deactivated.

On the road, the Whistler Pro 3600 is a pleasant driving companion. All of its primary controls are easy to use save for the audio volume, whose switch is inexplicably on the voice module itself. In our Lexus this was buried near our right foot, making it somewhat more accessible than if it were in the trunk, but not by much. We attribute this anomaly to Whistler's observance of patent protection and fortunately, audio volume is one of the least-used functions.

We found the Pro 3600's camera-location database reasonably accurate but it not infrequently shrieked warnings of intersection traffic-surveillance cameras that posed no threat. This is the legacy imposed by its database, many of whose locations are supplied by enthusiastic citizens, many of whom clearly can't distinguish a red light camera from a surveillance camera. The false alarms lead to an element of distrust and forces drivers to either verify every alert or mindlessly nail the brakes on each occasion.

We were surprised when the budget-priced Whistler scored well on 35.5 GHz Ka band and outpaced the Escort on 34.7 GHz Ka band. Its X-band performance also was competitive. Only on K band did the Whistler Pro 3600 falter, delivering less than half the Escort's warning range.

This was a remarkable showing from a detector priced some two C-notes less than the Escort. Coupled with a user-friendly nature and a full portfolio of features, this Whistler remote model is the first to venture tantalizingly close to the top dogs in performance and value.