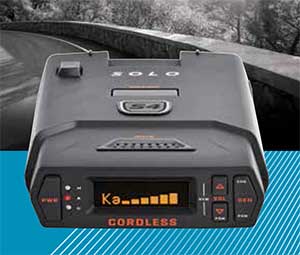 The front of the case was sculpted a bit and the detector received a much larger button for power on/off. At the opposite side of the case is a similarly-sized multi-function button, for sensitivity mode and user-preferences programming. The larger size makes it easier to find and takes some of the frustration out of programming the Solo S4.

The new Solo retains the yellow OLED display from its forebear, stylish but less readable than an LED display. We've made the same observation about the OLED displays in other Escorts.

The top-mounted mute button doubles as a battery-level indicator. To check remaining battery life, press the button and an icon is displayed. A pair of alkaline AA batteries is generally good for 30 to 40 hours of driving.

To save power, the display is momentarily backlit only when a function button has been pressed or during an alert.

When operating with the cord, the Escort Solo S4 provides five types of status displays. For example, it can be set to display voltage, indicating the health of the car's electrical system.

The Solo S4 has nine user-programmable options. These include three-level manual display brightness, full-dark or auto mode. City Mode offers standard, LoX (low-sensitivity X) and NoX (X-band disabled). The latter is useful in eliminating urban false alarms caused by the ubiquitous radar-controlled automatic door openers. Another option is selectable band defeat, allowing any radar band or laser to be deactivated. There also are alternate sets of audio tones and a fast power-up option to skip the self-test sequence.

Battery life is always a concern on cordless radar detectors and an automatic power-off feature is provided to prevent battery rundown. The latter can be set to shut off the power if no motion is detected for a while or after a period of inactivity.

Be aware that cordless convenience comes at a price. The Solo S4 has only a fraction of the range of even a mediocre corded model, particularly on Ka band, the frequency used by nearly every state police agency.

The Solo's feeble sensitivity means there's not much warning when you're about to blunder into a speedtrap. Drive with a Solo and we'd advise staying close to the limit.

GPS technology allows a detector to warn of red light and speed cameras. And since the detector knows how fast you're driving, the better ones have software that allows the user to adjust sensitivity and audible alert settings based on speed. This further reduces false alarms.

The big range penalty imposed by battery power may not be a deal-breaker for frequent flyers who live in rental cars, rarely speed and insist on cordless operation. Others may want to consider a good corded model instead.