Can Even the Best Radar Detector be Improved? 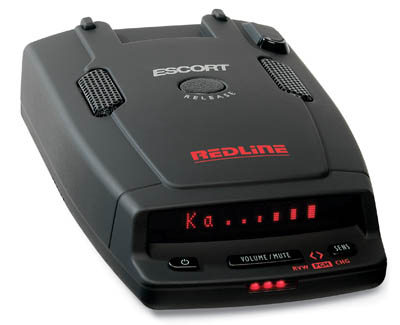 Phenomenal range and quick response make the Escort RedlineXR a favorite of enthusiasts.

The Escort RedlineXR holds the record of the world's longest range—we measured 14.2 miles under perfect conditions. But how does it stack up against the latest Escorts, like the Escort Passport Max 360? We decided to find out.

What gives the Escort RedlineXR its long range is advanced technology, a clever design and premium components. It's one of the few windshield-mounted detectors with dual radar antennae, for example. Both are forward-facing, a move to heighten sensitivity and increase detection range.

The Escort Passport Max 360 (and 360c) antennas point fore and aft instead, allowing it to depict the direction of an incoming radar beam.

The Escort RedlineXR targets the sophisticated road warrior. Its housing is matte-black and there are no chrome buttons or eye-catching graphics on top to reflect annoying mirror images into the windshield on sunny days. Unfortunately, the Passport Max 360 has plenty of both.

The LED display is inset into the case, shielded from the sun and easily read. We found it superior to the OLED display in the Max 360. Most noticeable is that the LEDs remained crisp and readable on sunny days.

The Escort RedlineXR doesn't have the GPS of the other Escort. The Max 360 uses it to combat false alarms from automatic door openers. The same technology warns when a red light or speed camera is neared.

Escort Live ($99 MSRP) is an app available for the Redline to give it the same capabilities. Using a special coiled Smart Cord with built-in Bluetooth, it links detector with smartphone, either iPhone or Android, and uses the smartphone's GPS. Once paired, the smartphone displays real-time speedtrap warnings overlaid on a map and also controls the detector

To measure resistance to false alarms we created a 91-mile-long urban loop. Aside from 26 miles of freeways, the remainder was split evenly between city streets and county roads. 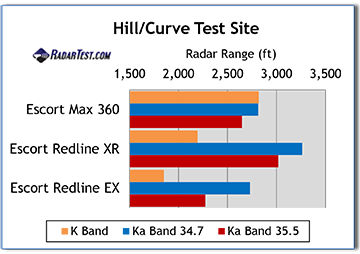 The Escort RedlineXR delivered significantly better Ka-band range (blue and red bars) than its siblings, important since Ka is used by nearly all state police.

On the first lap we logged the false alarms using a built-in model, the Escort Passport 9500ci. We found that most were caused by radar-controlled door openers.

When we made one more lap with each contestant, both Escorts were run in Auto mode to minimize false alarms.

The Escort Max 360 barked 10 false alarms, one each on X and Ka bands, the rest of them K-band. In contrast, the Escort RedlineXR was quieter with six false alarms, all on K band.

In this test the biggest advantage of GPS was denied the Max 360—it was seeing the route for the first time and hadn't yet locked out the door openers. But it did benefit from our slow speeds over much of the loop, where its software automatically dialed back sensitivity to help keep it quieter.

We tested against radar at our Hill/Curve test site. For comparison purposes we included the latest version of the Redline, the EX.

On K band the RedlineXR placed midway between the Max 360 and Redline EX. On this band less sensitivity is desirable. That's because K-band police radar shares the frequency with BSM (Blind Spot Monitoring) systems. These use radar to detect nearby vehicles and warn if a lane change is dangerous. With BSM systems outnumbering police radar by about 10,000 to 1, many alerts are false alarms.

Against the 34.7 GHz radar favored by many state police, the RedlineXR had 16 percent longer range than the Max 360, 20 percent more than the Redline EX.

The gap on Ka-band 35.5 GHz was equally pronounced. The RedlineXR outpaced the Max 360 by 14 per cent and it had a whopping 33 per cent more range than the Redline EX. Extra range like this can mean dodging a ticket.