As good as the Escort Passport Max 2? The Beltronics (BEL) GT-7 slots into the lineup above the Pro 500 and gives BEL a model comparable to the Escort Passport Max 2 and Max.

BEL and Escort are divisions of the same firm and under the skin, the three models are nearly identical. The Escort Passport Max 2 has one unique feature, Bluetooth, merely a way of linking a detector with the Escort Live app on a cellphone. The other two handle this using a special power cord with internal Bluetooth. That aside, they're all the same radar detector.

The BEL is controlled by six top-mounted buttons. Like the Escort Max twins', these are shiny and cast annoying reflections into the windshield on sunny days. Backlighting makes it easier to find them at night.

Amber is the default color of the OLED display. Optional: red, blue or green. Using its GPS, the GT-7 displays road speed and when linked to Escort Live, the posted limit is shown as well.

This information shares the display with operating mode and during alerts, with band identification and signal strength. That's a lot of information to be shoehorned into the tiny screen, and the low contrast offered by OLEDs means that sunlight—and especially sunglasses—can make it all disappear. 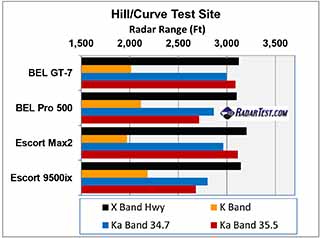 This makes the GT-7 and both Escorts best suited to users who prefer the plug-and-play operation of its factory-default Novice mode. Here the audible alerts are simple chimes, for instance.

Cruise Alert means that at speeds below 20 mph the alert is a simple red Slow Down message. There's also an Overspeed alert that nags like a back-seat mother in law whenever 70 mph is exceeded.

Cruise alert and the overspeed nanny can be adjusted or shut off, but only by entering Advanced mode and tweaking the user settings. Those unwilling to devote the effort can expect to remain perpetually annoyed.

Once inside the user preferences menu, the more ambitious drivers can opt for items like Meter mode. During alerts this changes the display from the default bar graph to either Spec or Expert. Spec shows a radar signal's numeric frequency, useful for anyone who understands the implications of, say, a 33.940-GHz alert. For everyone else, Expert mode may prove more useful. This shows multiple simultaneous radar signals and the relative strength of each.

With its GPS, this detector knows how fast the vehicle is going, enabling the use of a strategy to reduce false alarms. Speed-variable sensitivity dials back sensitivity at low speeds where police radar poses little threat. As speed rises, sensitivity increases proportionately.

Two bigger GPS benefits are its ability to automatically lock out nuisance signals causing false alarms and to warn of red light and speed cameras.

We tested the GT-7 at our desert test site. Compared to the BEL and Escort models bracketing it in price, the GT-7 displayed similar radar range.

We found the GT-7 to be blessed with excellent performance, good resistance to false alarms and industry-leading protection against red light and speed cameras.