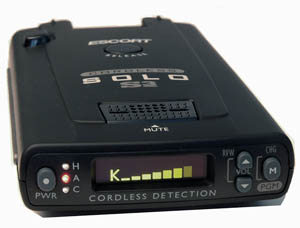 After the departure of the Whistler XTR-540 only one cordless model remains, the Escort Passport Solo S3. Successor to the discontinued Escort Solo S2, the Escort battery-powered model retains the latter's feature set and looks almost identical.

One difference is a new black housing that stills our complaint about the S2's platinum-hued case with its attendant windshield glare in sunlight. Gone is the LCD display, replaced by a stylish yellow OLED display that contrasts nicely with the black case. The new display is less readable than an LED display, an observation we've made about other Escorts with OLED displays.

All but one of its controls are on the front, which is dominated by the OLED display. This is flanked by a trio of status LEDs on the left, plus the power switch. To the right is a pair of volume buttons and a third for mode selection. Each button is covered with a rubber-like, non-slip material and operates with a well-damped, expensive feel. The volume buttons are very small and difficult to operate on the fly, although the mode button can be depressed with thumb or forefinger. Those with super-sized digits will likely choose to simply pluck the detector from the dash to effect programming changes, then replace it. 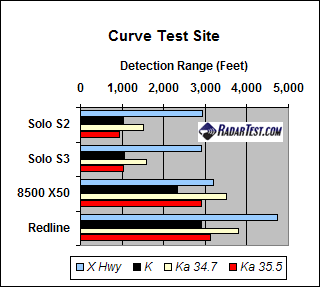 The large mute button—front and center on the case top—doubles as a battery-level indicator. To check remaining battery life, press the button and an icon is displayed. A pair of alkaline AA batteries is generally good for 30 to 40 hours of driving.

To save power, the display is momentarily backlit only when a function button has been pressed or during an alert. When the optional power cord is attached and the volts are free the display stays lit, as do the status LEDs.

When operating with the cord, the Escort Solo S3 provides five types of status displays. For example, it can be set to display voltage, indicating the health of the car's electrical system.

The Solo S3 has nine user-programmable options. These include three-level manual display brightness, full-dark or auto mode. City Mode offers standard, LoX (low-sensitivity X) and NoX (X-band disabled). The latter is useful in eliminating urban false alarms caused by the ubiquitous radar-controlled automatic door openers. Another option is selectable band defeat, allowing any radar band or laser to be deactivated. There also are alternate sets of audio tones, a fast power-up option to skip the self-test sequence and auto shutoff. The latter can be set to shut off the power after a period of inactivity to prevent battery rundown.

Be aware that cordless convenience comes at a price. The Solo S3 has a fraction of the range offered by similarly priced Escort corded models, particularly on Ka band, the frequency used by nearly every state police agency.

The range penalty imposed by battery power may not be a deal-breaker for frequent flyers who live in rental cars and place a premium on cordless operation. But those merely looking to eliminate a dangling power cord may want to consider a good corded model instead.