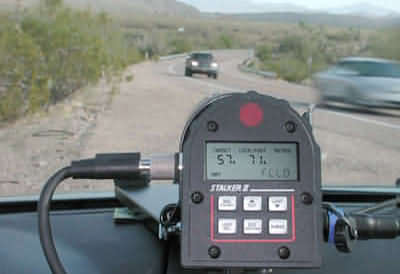 Radar watches for speeders in Arizona.

In breathless posts on enthusiast websites like Radardetector.net, members fret over the spread of Instant-On (I/O) radar. This new scourge is even more lethal than POP mode, we are warned.

For non-nerds, POP mode refers to the feature introduced in 2001 by MPH Industries. In POP mode the radar can transmit in a short burst and clock a car in as little as 0.016 second, too quick for a radar detector to respond. QT, or I/O, according to the chatter, is when an officer using non-MPH radar places the radar on standby (called RF Hold in the trade) and not transmitting, and then transmits in similarly short bursts. The result is the same—no warning.

Instant-on radar was created in the Seventies to defeat radar detectors. Placed on hold, the radar isn't transmitting and can't be detected, eliminating the traditional weakness of continuously-on radar. Even low-tech analog detectors of the era—the Fuzzbuster, for instance—could usually spot this type of radar.

Every frontline moving radar unit sold since the Nineties has the instant-on (RF Hold) feature. It's also found on most hand-held radar guns. 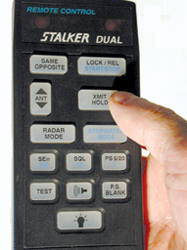 Stalker Dual SL Ka-band moving radar works while the vehicle is stationary or rolling. The officer's thumb hovers over the instant-on feature.

POP mode is a super-fast type of instant-on radar. The operator triggers the radar, it transmits for as briefly as 16 milliseconds and displays the speed.

Modern radar with instant-on capability can transmit and read a target speed in about 100 milliseconds, much slower than POP radar but quick enough to outwit detectors.

Salvation for detector-equipped speeders lies in the way radar is used. Although a speed may appear almost instantly, conducting the required target-identification process takes longer.

This is because police radar is dumb; in the presence of multiple targets, it can't tell the operator which one is producing a speed. For that reason it provides Audio Doppler, a tone whose pitch varies in proportion to target speed. This assists in target ID and warns of radar errors, particularly in moving mode. Before taking enforcement action, officers are trained to compare Audio Doppler with target speed, making sure the two roughly correspond.

The process can take several seconds and meanwhile, a sensitive radar detector will be alerting. Knowing this, some cops don't bother with target-verification, not infrequently citing the wrong driver as a result.

POP mode has never been much of a threat for two reasons: comparatively few of these MPH radars have been sold and, equally significant, it can only be used to momentarily sample a target speed. The speed can't be locked and the officer must repeat the process, using conventional mode, to lock-in the speed.

What newsgroup nerds call Quick Trigger radar isn't a burgeoning threat to radar detectors, although instant-on radar will always be a headache. The best antidote is a sensitive detector with long range and superior filtering to keep it quiet.

POP mode also remains a problem. Although radar detectors can be designed to catch these milliseconds-long signals, the tradeoff is more false alarms, in many cases a lot more. That's why this feature is a user-selectable menu option on most radar detectors, and they're shipped with POP mode shut off. Learn more about using detectors.