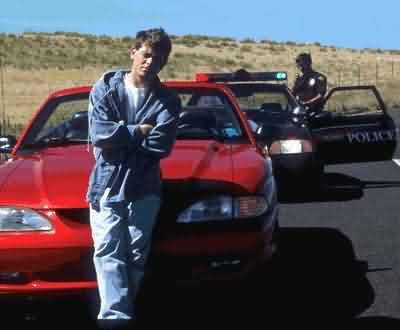 If you've bought a radar detector and are about to use it for the first time, don't make the mistake of just slapping it onto the dash and driving off. Unless it's mounted right and you're able to interpret the information it's trying to deliver, a radar detector won't be much help. Here are my top 10 secrets to getting maximum protection from your radar detector. 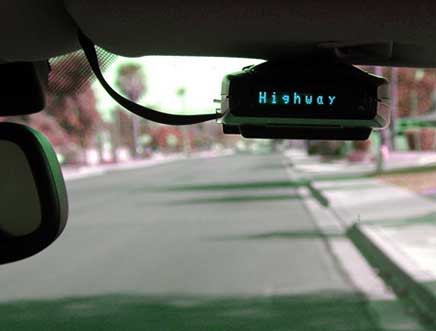 A visor mount gets the detector up high. The trick then is how to power it without running wires all over the cockpit.

First rule: Mount the detector where it has a clear view of the road ahead and where you can see it without looking away from the road. Keep it level and aimed straight down the road. Be careful not to block its antenna by mounting it behind anything made of metal—the windshield wipers, for instance.

For the best performance, conventional wisdom says to place the detector as high on the windshield as possible. This may sound like a good idea since radio and TV stations rely on tall towers to broadcast their signals. But police radar doesn't work that way.

A visor mount gets the detector up high. The challenge then is how to power it without running wires all over the cockpit.

Unlike signals from a radio tower, police radar is not omni-directional, transmitting in a 360° circle. Its beam is narrow, often no more 12 degrees wide.

The radar beam bounces off anything impenetrable in its path—road signs, structures and pavement included. The signal ricochets among these objects, enabling detectors to spot it. Moving the detector from the dash to the upper-windshield area won't improve performance; In 35 years of testing detectors I've never seen range increase by moving one higher.

Aside from a dangling power cord, there's another drawback to mounting a detector up high: It screws up laser detection.

Keep in mind that the width of a laser beam at 1,000 feet is no more than three feet in diameter, sometimes even less. If it's aimed at the grille or front license plate, the areas officers are trained to target, a dash-mounted detector has trouble spotting the laser. Move the detector still higher and the extra distance makes its job even tougher. (The only defense is a laser jammer.)

A mid-windshield location also entails some compromises. For one, you're advertising the fact that you're packing a radar detector. And many cops don't like them. "To me, they're the moral equivalent of burglar's tools," veteran Beachwood, Ohio Police Department traffic officer Bill Balcom told me once, reflecting the view of many officers.

Leaving a detector-equipped car in an unattended parking garage is no different than leaving a $100 bill on the dash. It's asking for trouble. When you're leaving the vehicle unattended, particularly overnight, always hide the detector along with its cord and bracket, both of them dead giveaways that a detector is inside. Rub off any suction-cup marks on the windshield; they also advertise the presence of a radar detector.

In summertime, another good reason to remove the detector during daylight hours is to shield it from sun. The windshield acts like a magnifying glass and we routinely find polycarbonate-case radar detectors reaching 150° within 90 minutes. Some metal-cased radar detectors get even hotter.

Secret #3: Learn how to interpret its alerts

Unless you're driving in Ohio, it's safe to ignore X-band alerts. No other state continues to use this ancient radar frequency.

A K-band alert might be the cops but it's just as likely to be the BSM (Blind Spot Monitoring) radar in a nearby car.

Blind Spot Monitoring systems warn when a lane change is dangerous. They use radar that causes radar detectors to false-alarm hysterically.

Blind Spot Monitoring systems warn when a lane change is dangerous. They use radar that causes radar detectors to false-alarm hysterically.

Ka-band alerts should be taken seriously since there's little besides police radar occupying that part of the frequency spectrum.

Weak K- or Ka-band radar alerts that quickly disappear may seem to be false alarms. But they could be something else. The radar may be pointed away from your direction of travel, for instance, or angled across the roadway ahead, reducing warning range. Hilly terrain can block the signal as well.

The detector could be alerting to a trooper working traffic ahead. He'll have the radar shut off, on standby. When an interesting target approaches, he'll fire and get a speed nearly instantly. Then he'll turn it off again to keep from advertising his presence to detector-equipped drivers.

If traffic is thin, the radar will often stay silent until the officer takes a shot at another vehicle. Ignore the danger signs and you could be his next customer.

The best radar detectors—all of them upscale models—use software to help identify and ignore BSM radar.

Another source of false alarms is the radar-controlled door opener. Drive within a quarter-mile of any big-box store, a Walmart, for example, and expect an alert from its automatic door openers.

The only way to eliminate this type of false alarm is a detector with GPS. The detector can store the signal's frequency and location coordinates, locking it out and staying silent the next time the signal is encountered.

These are pricier than non-GPS radar detectors but the big decrease in false alarms is worth the higher tariff.

Secret #5: Don't expect more than a detector can deliver

A radar detector merely confirms the presence of radar and lasers. If you can't be bothered to stay abreast of what's going on, you're asking more of a detector than it can handle. New owners of radar detectors, once they've outwitted a few radar ambushes, tend to develop a sense of overconfidence.

Several years ago we produced a series of trade films of new speed-enforcement products. This entailed using a variety of police vehicles, along with a state patrol aircraft, radar and lasers.

One director on the project was so intrigued by radar detectors that he bought one after shooting wrapped. During our weeks ahead in the editing suite, he'd arrive each morning bragging about how he'd shaved another few minutes off his 120-mile roundtrip freeway commute.

Eventually the inevitable happened and he was popped for speeding. His comeuppance came from a highway patrol Cessna 172 equipped with nothing more exotic than a stopwatch. His detector naturally remained silent. Moral: Don't take a knife to a gunfight.

For the few who don't mind the endless chatter, a VHF/UHF radio scanner allows one to eavesdrop on speed-enforcement aircraft. Drivers can learn of speed traps in progress and other threats by listening in.

Situational awareness might also have saved our hapless colleague. Telltale white stripes were painted across the highway and had he looked up, the Colorado State Patrol Cessna was circling overhead.

Secret #6: Use City Mode in Town

Don't even think about driving in town with the detector left in Highway mode—it'll false-alarm hysterically. 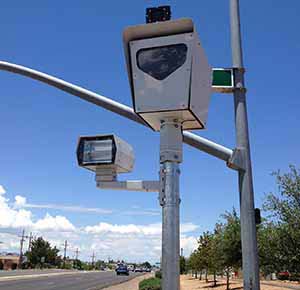 Aside from locking out nuisance signals, GPS also allows a detector to warn of red light and speed cameras. And since the detector knows how fast you're driving, the better ones have software that allows the user to adjust sensitivity and the onset of audible alerts based on speed. This further reduces false alarms.

This one's important, so listen up. Here's why. Once while checking the top speed of a test car on a desolate New Mexico highway, we popped over a hill and met a short line of vehicles. Our detector screamed an alert and we spotted a highway patrol car bringing up the rear of the procession.

This should have been a slam-dunk for the officer. But in his excitement, by mistake he triggered the rear radar antenna, rather than the front one that faced us. Brakes smoking, we were under the limit before he could select the front antenna and take another shot. Moral: don't wait to react.

Secret #8: Use Highway Mode When Possible

On the open road, we'd suggest using Highway mode for two reasons. One, for maximum radar-detection range. Two, to restore the audible alerts for low-signal-strength encounters. Left accidentally in City mode, the range of many detectors will be so limited they won't warn of radar working traffic far down the road ahead.

In areas where photo radar is used, those driving with a GPS-enabled radar detector should remember that City (or Auto) mode reduces detection range. Photo radar is unbelievably tough to detect—and the job's even tougher in City mode. Blunder into the beam of a Redflex or ATS photo radar unit and the detector will need every decibel of sensitivity to spot the feeble signal soon enough.

When you get a strong signal-strength alert, it means the radar is close by, possibly already clocking you. But there are occasions when radar misbehaves. So even when it seems like a waste of time, adjust your speed promptly. You might get lucky.

One suggestion: Be mindful of traffic behind you before standing on the brakes. If some clown is tailgating you, heavy braking could well have him center-punching your back bumper.

It sounds like common sense but face it, there are different levels of alertness. A detector will sometimes tip the scales in your favor, but the inattentive who stray much beyond 10-12 mph over the limit will eventually get nailed.