There's a staggering array of features mentioned for radar detectors and many are manufacturer-specific. This often makes it impossible to compare a model from Cobra or Whistler to, say, one from Radenso, Escort or Uniden.

For example, how to rate the importance of a Cobra feature, "Spectre Mk 1 Undetectable"? (The Spectre is a radar detector-detector used by lawmen to spot illicit detectors.)

The Cobras cost less and if they're Spectre-proof, seemingly worth a look. But the claim is misleading since the Spectre Mk 1 disappeared years ago. Newer versions like the Spectre Mk 4 can easily spot Cobras from a quarter-mile away.

15-band detection suggests that 15 are better than the three claimed by others. But only three are approved for use in the U.S. Just two—Ka and K—are common. The rest are a Cobra creation.

Listed alphabetically by manufacturer, here's our take on some of the most frequently mentioned features.

Cobra is a master at creating dozens of models—spanning a wide range of price points—from three or four platforms. Pseudo-features are used to help separate their models from each other and from the competition.

There are only three radar bands used in the U.S.—X, K and Ka. Of the remaining bands claimed by Cobra, only Ku band is a radar frequency—and there's never been a Ku-band radar sold in this country.

Early Cobra OLED screens were huge, distracting during daylight and unbelievably annoying at night. The current version is marginally smaller but not much more enticing. Small wonder that the screen automatically disappears after a few minutes, requiring the driver to wake it up in order to view status.

Feature value: Limited, except as a marketing tool.

Intellimute Pro mode makes a Cobra undetectable by shutting off its detection circuitry. While there's no signal to detect, neither does it warn of radar, leaving the driver defenseless.

The transmiters necessary for the Safety Alert system to work are nonexistent, rendering it useless. And even when a few were around years ago, no Cobra could detect them from more than a few car lengths away.

The only Safety Alert warnings we've experienced in recent years were false alarms. These included strident warnings of phantom trains during our test of Escort Live and Cobra iRadar.

The Spectre (called Stalcar outside the States) Mk I was introduced in 2000 and was succeeded by the Mk II two years later. Most of these units were retired years ago.

The more recent Spectre Mk IV is the one to worry about. And it can easily spot Cobras, alerting to the SPX 5300 model from 707 feet away, for instance.

The term "alerts" is used somewhat loosely. When we tested Cobras' ability to detect the Spectre Mk IV+, none could spot it from more than 15 feet away.

Having tested this feature, we can verify that Strobe Alert reacts only if an emergency vehicle is coming head-on and it's at point-blank range.

If the strobe-light beam is coming from the side or rear—occasions when a heads-up might be useful—it's clueless.

The Canadian-made Technisonics Interceptor VG-2 RDD has been out of production for years and few remain in service. Regardless, except for some older Whistler models and the Adaptive TPX motorcycle radar detector, nearly every detector sold in the U.S. since the late nineties has been undetectable by the VG-2.

An OLED display looks sexier than the LED equivalent. But it's a different story on the road, where it can wash out badly in sunlight. Cobra and Whistler compensate for the OLED's lower contrast by making the alphanumeric characters larger. Escort doesn't and readability suffers accordingly.

With digital signal processing or DSP, a microchip compares the electronic signature of a radar signal to those of false alarms. Auto mode significantly cuts the number of false alarms, especially in town.

It's not uncommon for two microwave signals to be present simultaneously, particularly in town. This presents a dilemma for the detector: to which signal should it alert? Traditionally manufacturers have prioritized alerts, with laser deemed most critical, followed by Ka, K and X band. But only one of these frequencies is displayed, leaving the driver clueless about the nature of the other threat.

Escort's solution to this problem is called ExpertMeter It displays up to nine simultaneous signals along with the relative signal strength of each. Competing models from Radenso also display multiple radar signals.

The microchip supporting a detector's Digital Signal Processing (DSP) could, in theory at least, be a read-only EPROM processor instead. Once programmed, it's locked forever, no changes or updates allowed.

Escort uses read/write microchips that can be reprogrammed. The marketing claim is that this feature allows the detector to be updated to meet future threats.

While that's accurate, the lifespan of a detector—and the typically long intervals between significant new enforcement threats—mean that the odds on returning a detector for software upgrades are probably even-money or less.

Escort offers Spec mode (BEL calls it Tech mode) to digitally display a radar signal's frequency. This permits an instant analysis of a Ka-band alert—at least if you know which Ka-band frequencies are used by police radar.

The boffins at Whistler have also generated some unique acronyms in recent years. This gives attentive drivers a better chance of avoiding speed traps.

The current models deliver above-average range for the price, well documented in our tests of the Whistler CR85 and CR90, (both now been discontinued).

Cobra introduced this feature to legitimize its use of different models of laser to create additional "bands". But while Cobras frequently incorrectly identify laser signals, Whistlers usually get it right.

Feature value: Low, except to nerds. 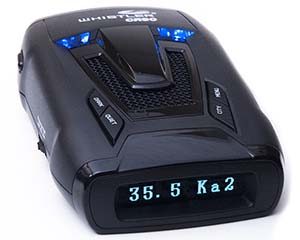 Well meaning perhaps, but dumb and intrusive. Worse, it's easy to accidentally engage this feature and without the owner manual, it's nearly impossible to disable. Until then, a female voice will shriek warnings to get some rest, just like having your mother-in-law in back.

Feature value: Some narcolepsy sufferers may find it useful.

The term filter is a good way to describe this feature's purpose in life. It passes incoming signals through an additional set of filters that help to weed out spurious signals from other radar detectors. Most useful in town, it works as promised.

This is Whistler's nomenclature for selective radar band deactivation. Those who don't have to fret about X-band radar can shut it off to limit urban false alarms, for example.

A radar detector doesn't draw much power but if left on, eventually it will drain the battery. This feature switches the detector off after a period.

Feature value: Low, unless a vehicle is parked at an airport or elsewhere for weeks at a time.