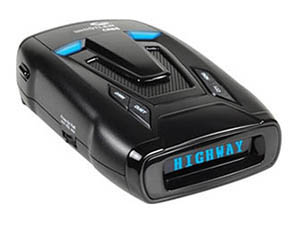 The Whistler CR90 marks the company's first offering in the windshield-mount, GPS-enabled radar detector and occupies the top spot in the CR-Series. Those uninterested in the GPS feature might opt for the less expensive Whistler CR85 instead. Other than GPS—and price—the two are identical.

The Whistler CR90 sports an all-black housing, its upper section mercifully devoid of the chromed buttons and other brightwork that adorns many competing models. Those may look fabulous on the store shelf, but try living with the reflected glare cast onto the windshield on sunny days.

The front of the Whistler CR90 case is dominated by a blue OLED text display that’s far brighter and higher-contrast than many such designs. Unlike some, it can be read without binoculars and stays legible in sunlight.

In the Whistler CR90, the GPS antenna resides inside the housing, where it belongs. In contrast, some early Cobra GPS models used a thumb-sized module plugged-in to the USB port. 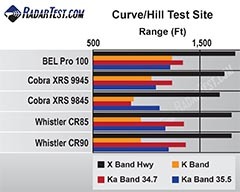 Both voice alerts and tones are provided, easing the Whistler CR90’s information-delivery task. Visual alerts are displayed on the OLED screen, augmented by two blue LEDs that flash during radar and laser attacks.

The Whistler CR90 is designed for plug-and-play operation but has user settings that allow fine-tuning.

There’s also a variety of features to reduce false alarms. Three City modes progressively lower X-band sensitivity or disable it. There are six filter modes for the trio of radar bands, allowing a separate level of filtering for each. Audible alerts can be speed-based, keeping mum below a threshold velocity.

Engaging TFSR (Traffic Flow Signal Rejection) tells the Whistler to ignore signals from the low-powered, pole-mounted radars increasingly being used by engineers to monitor traffic flow and speeds. TFSR recognizes the spurious signals and ignores them. We tested the system in metro Denver and verified that it works well.

One invaluable feature is Ka RSID, short for Ka-band Radar Signal Identification. It verifies when a Ka-band radar signal is coming from a police radar gun and not something that poses no threat.

Aside from the range-topping CR90, the Ka RSID feature also is standard on the Whistler CR85 and remains one of the more useful tools for avoiding a ticket.

Another advanced feature is called Segmented Selectable Laser Receiver. This divides laser detection bandwidth into three segments and allows one or more to be deactivated, reducing false alarms from non-police laser signals. In factory-default trim all three are engaged, but the exceptionally adventurous are allowed to experiment.

At our Curve/Hill test site the Whistler CR90 and CR85 stayed very close to class-leading BEL (Beltronics) Pro 100. Against its Cobra competition the Whistler CR90 (and the CR85 we also tested) proved significantly hotter on the X-band radar frequency.

That gap shrank on K band but widened again on the two most widely used Ka-band radar band frequencies, 34.7 and 35.5 GHz. This is worth noting since Ka band is the radar frequency of choice for nearly all state highway patrols.

The Whistler CR90 stands out for its sophisticated design and effectiveness in countering radar and red light cameras.