In reality the Beltronics Pro 300 is an Escort that visited a different tailor. (BEL is an Escort division and the two share models.) It slots into the BEL lineup one notch below its excellent GPS-enabled sibling, the BEL Pro 500.

Below it are two lower-priced Pro models, the BEL Pro 200 and the entry-level BEL Pro 100. All three use the same housing and aside from badges, look identical. The chief differences are price, features and performance, particularly the latter. 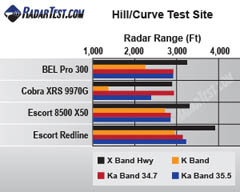 The BEL Pro 300 is plug-and-play but also offers seven user-selectable options, one of them voice alerts. These make threat identification nearly idiot-proof and speed the process of getting acquainted. Alert tones are also available.

Audio can be adjusted remotely via the mute button on its coiled SmartCord power plug. This is useful when the detector is mounted out of easy reach, particularly on a motorcycle or when using one of the extra-long Direct Wire Smart Cords.

The BEL Pro 300 also has Tech mode (a.k.a. Spec mode), a handy feature that will tell the driver whether a Ka-band radar alert is police radar or another radar detector.

With no GPS, the Pro 300 couldn't match the Escort Passport Max 2 or Escort iX, both of which remained nearly mute during our Urban False Alarm test.

There's a solution for this, however. The BEL Pro 300 is compatible with Escort Live which uses a special power cord with Bluetooth to link to a smartphone, either iPhone or Android. Once paired, the free app and the smartphone's GPS are used to axe false alarms while delivering real-time warnings of roving cops and speed traps ahead.

We tested the world's long-range champ, the non-GPS Escort RedlineXR, in combination with Escort Live and saw a huge spike in its overall protection level.

By a similar margin the Pro 300 was also a near tie with the Escort Passport 8500 X50 for third-place honors on K- and X band. It did equally well against the stealthy Redflex photo radar unit.

The BEL Pro 300's lavish array of features and long radar range make it our top pick in the under-$300 price class.