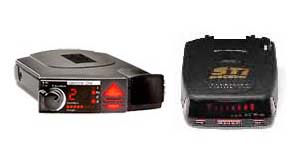 Discussions about radar detectors inevitably get around to the question: What's the best radar detector? Tough call: the definition of "best" varies widely, as do drivers' expectations.

Two models claiming to be the ultimate in radar protection are the Valentine One (or V1), and the Beltronics STi Magnum. To gauge their merit, we anonymously purchased samples and ran them through our battery of tests.

Until the arrival of the Beltronics STi Magnum, the Valentine One was the only windshield-mount model in the over-$395 price segment. It's since been joined by others; these include high-end GPS-enabled models from Escort, Radenso and Uniden.

The issue of long-range supremacy brought up one question we've never been able to answer. Nor has anyone else: Given unrestricted room, how far away can the best radar detectors spot police radar?

We used a 14-mile-long swath of die-straight, level highway in western Arizona. We measured its elevation at 1,000-foot intervals using GPS units, double-checking the data with Google Earth. Both showed less than a few hundred feet of elevation deviation over the length of the site.

In fairness, it's worth noting that the farthest point on the site was about 200 feet higher in elevation than the radar vehicle, parked on the shoulder some 12 miles away. This extra height initially gave each detector a better chance of spotting the radar. But after our target car had descended that tiny hill, the remainder of the course was almost flat, marked occasionally by imperceptible high points.

We also tested the Beltronics STi Magnum and Valentine One at our Hill/Curve Test Site 30 miles northwest of Phoenix, the ultimate real-world test. The radar vehicle is hunkered down in a plunging S-curve, picking off targets as they pop into view less than 750 feet away.

A maximum score of 200 points was possible: 140 for radar performance and 20 each for resistance to false alarms, features and ergonomics. Radar scores were weighted by threat level. X band: 5 points, K band: 20 points and 15 each for the three Ka-band frequencies. Radar scores from the two test sites were averaged.

The Valentine One, introduced in 1991, received laser-detection circuitry in the mid-1990s and a revised circuit board in 2007. Aside from a few firmware revisions over the decades, it's little changed from the original.

Same thing at the Hill/Curve Test site. Although its X- and K-band scores were excellent, closely trailing the Beltronics STi Magnum's, again it lagged well behind the Beltronics on 35.5 GHz Ka-band. We noticed the same behavior in a later shootout with the Escort Redline.

More troubling was the V1's sudden refusal to detect K-band radar, even when parked next to it. The Valentine One displayed no warning of possible trouble, but it clearly was dead on K band. After purchasing a second sample, also with the latest software, we re-ran both tests. (The problem was excessive heat.

Scores totaled, the Beltronics STi Magnum edged out the V1. Does that make the Valentine One the world's second-best radar detector? V1 fans are quick to praise its directional arrows, rear antenna and superior laser detection. And they've got a point. Under ideal conditions the directional arrows can pinpoint the direction of an incoming radar beam. And the rear antenna allows the V1 to detect radar coming from behind nearly as well as from ahead. It's also the best in the business at detecting lasers. Some may feel these attributes help to offset its shortcomings.

Radar coming from behind, though, isn't a major threat. And even without a rear-facing antenna, the STi Magnum and Escort Redline can detect radar in back from a mile away or more. While it's true that detecting lasers can occasionally be helpful, the only laser defense remains the laser jammer.

Clearly the Valentine One can still keep its newer competitors within sight. But advances in technology denied it top ranking in this test. 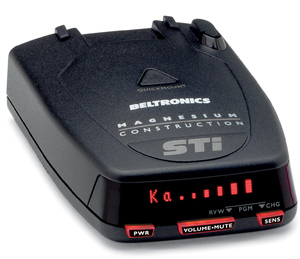 The Beltronics STi Magnum uses its dual, front-facing radar antennas to improve performance. The BEL is also one of the few that's immune to radar detector-detectors like the Spectre RDD.

Like the Valentine One, the Beltronics STi Magnum is a non-GPS design, but it's compatible with Escort Live. The system includes built-in Bluetooth that links the detector to either an iPhone or Android smartphone loaded with the free Escort Live app. Once the two have been paired, the phone adds the benefits of GPS to the Beltronics STi Magnum, cutting false alarms while warning of red light cameras and speed traps.

The Beltronics STi Magnum excelled at ferreting out distant radar. It spotted all five of our radar guns from over 11.25 miles away, the best performance we've seen. [Since eclipsed by the Beltronics's corporate cousin, the Escort Redline.]

On Ka band, by far the most critical radar frequency, the STi Magnum outperformed the Valentine One. It also eclipsed the V1 in user-friendliness and ease of operation. And unlike the Valentine One, the Beltronics STi Magnum has self-test diagnostics to protect against overheating.

We were curious about the cause of the V1's mid-test failure. Both contestants have a magnesium case; we wondered if thermal buildup somehow caused our first V1 to overheat.

To find out, we placed two of each model detector on the dash of an Audi A4 and left them running. With windows up and engine off, we checked temperatures at 20-minute intervals using a digital pyrometer. Ambient temperatures during testing ranged from a balmy 78 degrees to 93 degrees Fahrenheit.

We were surprised by the results. Neither Valentine One indicated a problem, although both had reached 153° F within 58 minutes. At the 62-minute mark our first Beltronics STi Magnum hit 154° F. Then it displayed a "Service Required" warning and shut down to protect itself. The other STi Magnum followed suit 18 minutes later, its metal case having reached 163° F.

Test complete, we started the Audi and ran its A/C until the interior again was at room temperature. But one V1 remained dead on K band, the other on both X and K bands. Each required factory repair, taking them out of service for two weeks. We were disappointed at the Valentine One's lack of diagnostic software to warn of these silent failures.