Control/display module is all that's seen inside the vehicle, protecting from theft—and official scrutiny.

The traditional solution has been the custom-installed remote radar detector whose discreet components are built-in to the vehicle. Trouble is, these remotes are pricey. The Escort Passport Max ci 360 costs $3,499, for example, plus installation.

This makes the Escort Passport 8500ci Plus a comparative bargain. Like the others it has GPS to protect against red light and speed cameras. It can also be fitted with the Shifter Pack, dual front laser jammers to counter police lasers.

The Escort 8500CI radar antenna mounts in the grille area, linked to an interface box under the dash. A thumb-size control/display can be placed anywhere it's convenient to see and operate. 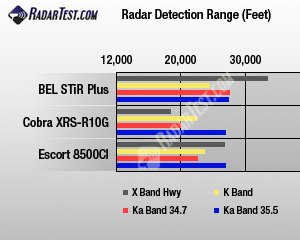 All of the BEL and Escort remote models, the Escort Passport 8500ci Plus included, have an additional attraction for those with leased vehicles—the display can be surface-mounted without drilling holes in the dash, damage certain to be noticed when the car comes off lease.

Meter options include Bar Graph (these increase progressively to depict signal strength); Spec Mode or Expert Meter. The latter will track up to nine simultaneous threats, displaying the band ID and relative signal strength for each. For the knowledgeable, Spec display is invaluable, allowing non-police radar signals to be identified and dismissed at a glance.

An amplified auxiliary speaker installs under the dash and broadcasts audible alerts at 108 decibels, loud enough to be heard in a top-down convertible at freeway speeds.

The Escort Passport 8500CI Plus has GPS and warns of red light and speed cameras.

Another test that compared conventional detectors with the GPS-enabled, among them the Escort Passport 9500ix, we circled an urban loop and recorded the number of false alarms from each model. The difference in behavior was surprising.

For example, one sensitive non-GPS model, the Valentine One or V1, blurted dozens of false alarms. In comparison, the Escort 9500ix and its clone, the Beltronics Pro 500, each uttered only only a handful of false alarms. The Escort Passport 8500ci Plus's GPS gives it a similar resistance to false alarms.

With its modest price and stellar performance, the Escort Passsport 8500ci Plus remains one of the most desirable built-in radar detectors.